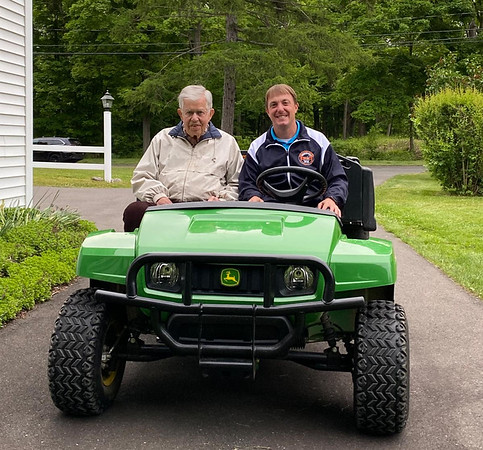 SOUTHINGTON – The Southington-Cheshire Community YMCA has established a new fund in honor of the late Ralph Mann, whom CEO Mark Pooler describes as his inspiration and a dedicated volunteer with a love for YMCA Camp Sloper. The fund will provide camp scholarships to help people attend the camp Mann loved and cherished.

Pooler said Mann, who died August of last year, was "an amazing gentleman" and "one of the biggest inspirations" of his YMCA career.

"He was so caring, so compassionate and so considerate of others," Pooler said. "I wish that we all could have a role-model in life like him."

Pooler said Mann will be remembered for his numerous contributions to the YMCA and the community as a whole.

"Ralph did not just live and work in the town of Southington – he gave back," Pooler said. "He gave countless hours of volunteer time to various organization and numerous monetary donations that show his philanthropic pride and willingness to help others."

Mann was Board President of the YMCA from 1964 to 1966 and he also frequently volunteered at Camp Sloper.

"He spent countless hours clearing the trails, fixing up the property, clearing trees and brush and making annual improvements to the facility," Pooler said.

Pooler said the YMCA has already received several donations for the fund. The first $2,000 of these donations will be used to create a bench in Mann's memory in the YMCA Memorial Forest.

"His bench will be placed to the bench for Doug McCloud, who Ralph was good friends and neighbors with," Pooler said. "Doug was the former director from 1974 to 1992. After that initial $2,000, any money that we receive will go toward YMCA Camp Sloper scholarships for next year."

Pooler said Mann's widow, Meredith, is pleased to see the YMCA honoring her late husband's legacy. She is his neighbor and lives across the street and they are good friends.

"We'll be doing something more formal with close friends and family to honor Ralph in June next year," he said. "We will also commemorate him at Camp Sloper when we can hopefully all get together again."

Pooler asks anyone who was positively impacted by Mann to consider making a donation in his honor and his memory.

"He has been an inspiration to many and his spirit lives on in those who knew him and loved him," Pooler said. "Thank you Ralph Mann for being a gentleman, mentor and supporter to so many in the Southington community. You will be missed but never forgotten."