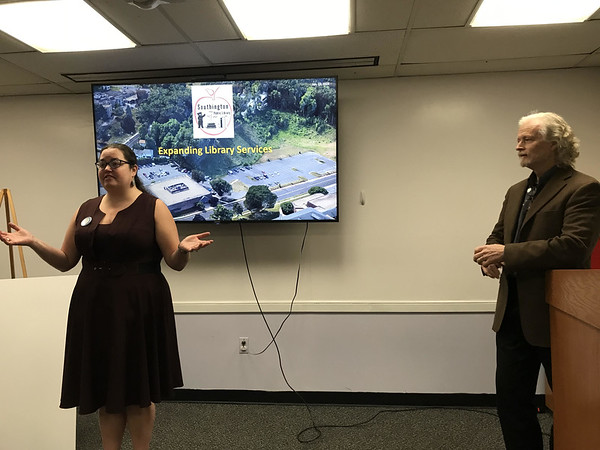 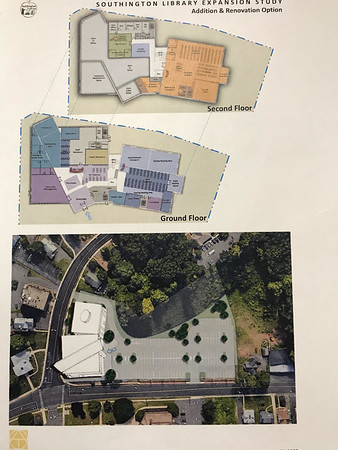 Brian Johnson Staff Some of the priorities laid out by Southington Public Library for either a new building or an expansion of the current one. Buy this photo 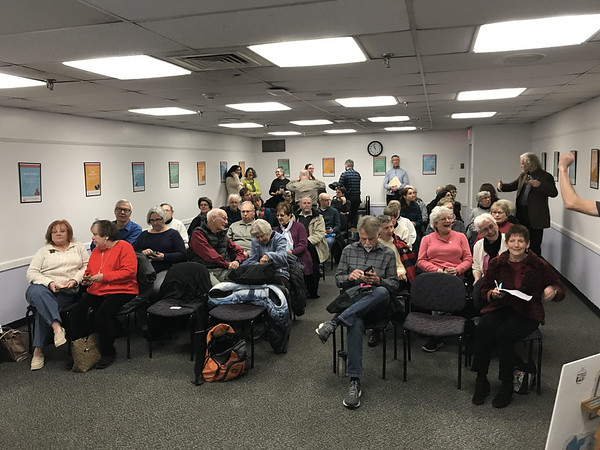 Brian Johnson Staff Residents pack the meeting room at Southington Public Library to hear about plans for either a new building or expanding the current one. Buy this photo

SOUTHINGTON -Residents packed the meeting room at Southington Public Library to capacity Thursday morning as they heard explanations of what either an expanded library facility or a new building would bring to the town.

The meeting was put on by Southington Public Library Director Kristi Sadowski and Jeff Hoover, library design director with Massachusetts-based Tappe Architects. Several dozen residents, mostly seniors, filled up the room. These residents got a look at the library’s priorities for a new or expanded library and how space would be allocated and then had an opportunity to give feedback.

Just prior to the start of the program, Kevin Curtiss, chair of the library board, greeted the residents who attended.

“I can’t believe the turnout we have,” he said. “We’re so excited for this project and we’re glad that you’re all here to be the first ones to hear about it.”

Sadowski then began by giving residents some background information about the library. She said that building was constructed in 1974 and hadn’t seen major renovations since.

“The average library in the state still in use was built in 1991,” said Sadowski.

The current building is also not ADA accessible and does not meet fire codes. She said the library has spent $20,000 this year alone in making sure that aging HVAC systems were working and that the building has been designated as a cooling and warming center by the town.

Hoover said that he conducted a survey with residents and that thousands residents responded. More than 2,500 of those residents left additional comments about what they wanted from the library. This helped him to identify a list of priorities for the new or renovated building.

The priorities included a larger story and craft room to accommodate 30 kids, an early learning activity space with more computers and more accessible bookshelves for children. Teens would also see enhanced space, with a “hangout zone,” a homework and group project area.

The new building will also be compliant with building codes and access regulations and have a higher efficiency heating and cooling system. Both building plans would also see larger windows surrounding the structure to let in more light.

The renovated building plan calls for an addition to be made above the current structure. The library would remain open while renovations are underway, which Hoover said will add more time and cost to the project.

The new building plan would see a new building constructed to the right of the current building, in the parking lot area. The old building would then be demolished and new parking spaces would be created. While this plan would take less time, it will impact parking while the new building is under construction.

Hoover then answered several questions from residents in the audience, before they were invited to get up to look at large blown-out pictures of the layout of the two building proposals. These proposals will also be viewable at southingtonlibrary.org.

Hoover said that an environmental impact study and hazardous materials abatements will be conducted regardless of which proposal is chosen. However, no contamination has shown up in previous site studies.

Hoover stressed that with the library being brought up to code, there will an adequate number of bathrooms and elevators. He also assured residents that he met with maintenance crews to get their feedback on proposals.

Sadowski said that the costs of the two plans are still being determined with the Planning Committee. The library will present the results to the Town Council at their first meeting in March.