10/5/2019 Mike Orazzi | Staff Robert Riggs demonstrates the art of making pottery while at the 51st Annual Apple Harvest Festival in Southington on Saturday. Buy this photo

10/5/2019 Mike Orazzi | Staff Abriel Marcano enjoys some time behind the wheel of a fire truck while at the 51st Annual Apple Harvest Festival in Southington on Saturday. Buy this photo

10/5/2019 Mike Orazzi | Staff Bob Sweig and Lisa Phelan while at the 51st Annual Apple Harvest Festival in Southington on Saturday. Buy this photo 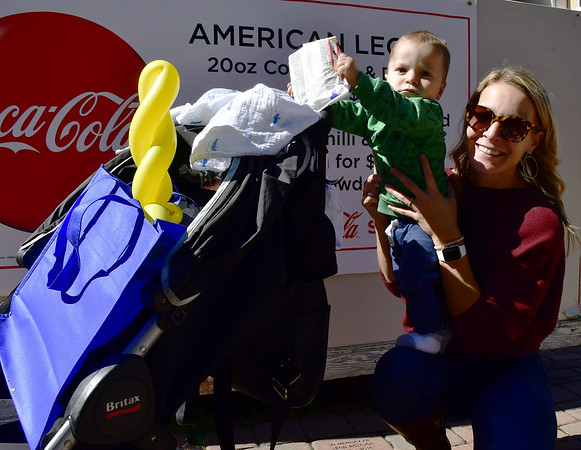 10/5/2019 Mike Orazzi | Staff Katelyn Bartone and her son Ben while at the 51st Annual Apple Harvest Festival in Southington on Saturday. Buy this photo

SOUTHINGTON - Over the course of its 51 years, the Apple Harvest Festival has become a tradition in town.

It has become a tradition for Mary Barbagallo and her family as well. Self-described “Southington hometowners,” they have been attending since the beginning.

Barbagallo took her children to the festival for years and on Saturday, she went with her daughter and two grandchildren. As the saying goes, the apple doesn’t fall far from the tree.

“We did my children and now it’s my grandchildren,” she said.

The second day of the Apple Harvest Festival featured an apple pie baking contest and apple fritter eating contest as well as a performance by the Spin Doctors followed by fireworks.

While apples were at the core of the festival, visitors munched on a variety of other cuisine, like Indian and Thai, and fair food, like ice cream and fried cookie dough. With tacos, crab cakes, shrimp, pumpkin spice fritters, poutine and bacon waffle burgers, everyone had something to eat.

For those who wanted something more traditional, the Southington Fire Department was grilling up hamburgers and hot dogs.

“We had a great night last night and it looks like we’re going to have another great day today,” said Nelson DeAngelo, who retired from the department after 44 years.

DeAngelo got the fire department involved in the fair 50 years ago.

Allison St. Pierre and her husband John, from Rocky Hill, enjoyed the festival because of its family-friendly atmosphere and because it was on the smaller side.

By noon, the line for apple fritters was already around the corner.

Kristin Nguyen and Jessie Grow took a stroll through the Feed Live Butterflies exhibit, a free attraction on the center of the town green.

“It was awesome. It was really pretty. They were all on the mums,” said Grow. “My daughter’s two and she loved it.”

In addition to carnival rides and food vendors, businesses also had a chance to show what they have to offer at their own booths along North Main Street.

An outside living space, complete with couches and throw pillows, stood outside Berkshire Hathaway HomeServices, a real estate agency. Employees handed out reusable drink containers and showcased their services.

Whether you want to downsize, upsize or invest, the agency can help meet all your needs, said realtor Theresa Jakubowski.

“Southington, and Connecticut as a whole, has awesome historic architecture,” she said. “Buyers have an unlimited amount of styles to choose from.”

The Southington Apple Harvest Festival will return next weekend starting Friday at 5 p.m.