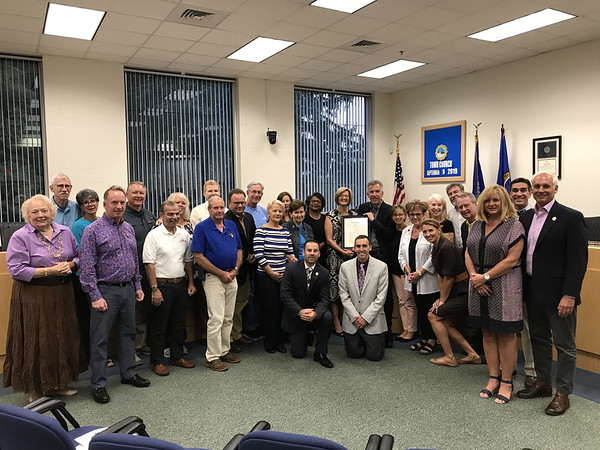 Brian Johnson Staff Bread for Life is recognized with a proclamation from the Southington Town Council in honor of their 35th anniversary. Buy this photo

SOUTHINGTON - Bread for Life was honored with a proclamation for its efforts on behalf of the needy for 35 years at Monday’s Town Council meeting.

Council Chairman Chris Palmieri thanked Bread for Life for its “contributions every day for those most in need.” Several Bread for Life board members and Executive Director Donna Ayer were present to receive the proclamation.

“The council offers its sincerest congratulations to Bread for Life for reaching their 35th anniversary,” said Palmieri. “They are a nonprofit organization whose mission is to provide food, fellowship and a sense of dignity for those in need. They serve 125 meals a day in their kitchen and deliver meals to homebound seniors and kids over the summer.”

Palmieri also praised Bread for Life for its community outreach efforts. He declared Tuesday “Bread for Life Day” in Southington.

Ayer said she “deeply appreciates” the recognition from the Town Council and “all those that make the work we do possible.”

“We couldn’t do this without the support of the community,” she said.

Volunteers with Bread for Life then presented council members with heart pins.

“We have been working from the heart for 35 years,” said Ayer.

The council was also handed “blessing bags.” These bags contained water bottles, socks, granola bars and information about Bread for Life and its services. Ayer encouraged council members to give the blessing bags to someone in need.

Later in the meeting, Fire Chief Richard Butler gave a presentation about his department. He said volunteer recruitment is a top priority.

“We are also actively seeking to recruit women,” he said. “This is an area that Southington is behind on.”

Butler said the Fire Department needs a strong volunteer workforce since the town cannot afford to have a completely career fire department. He said his goal is to have a unified department.

Palmieri said that the town allows fire volunteers who are also town employees to leave to respond to calls during the day. He encouraged business owners to do the same.

Butler also discussed the department’s outreach efforts. During the last Apple Harvest Festival, people were able to sign up for home inspections. He said that was a “big hit” and will return again this year.

“We check for smoke detectors, overloaded extension cords, extension cords going under rugs and other fire hazards,” he said. “It’s about education.”

The meeting began with a moment of silence for Julia Bruno, a Southington High School senior who died in a recent car accident.

“It was touching to see so many members of the community come out for such a great tribute to her,” said Palmieri, referring to the vigil held in her memory.

Brian M. Johnson can be reached at 860-973-1806 or bjohnson@centralctcommunications.com.