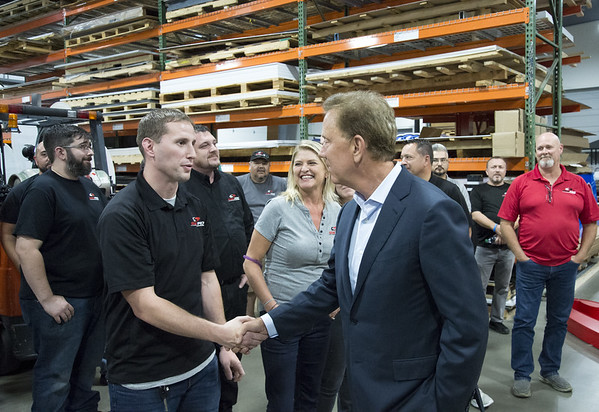 Wesley Bunnell | Staff Gov. Ned Lamont speaks with Sign Pro employee Will Arcari during a tour of the plant on Monday. Buy this photo 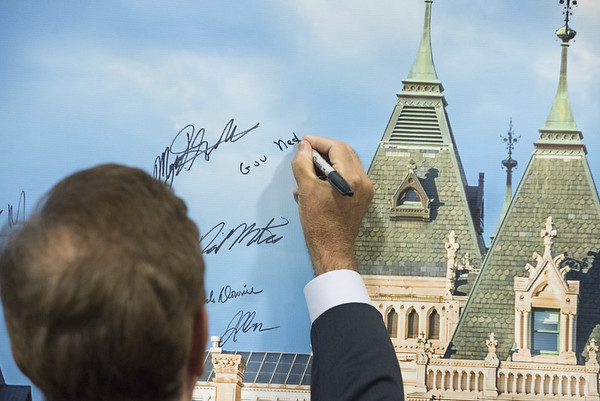 09/09/19 Wesley Bunnell | Staff Gov. Ned Lamont visited Sign Pro in Plantsville on Monday afternoon to visit and discuss Proposed Bill No. 5504 An Act Concerning the Net Economic Value of State contracts. The bill recommends the state hire CT businesses on contracts using state funding as part of the state contracting practices. Governor Lamont adds his name to a large mural of the state capitol building which was signed by all Sign Pro employees. Buy this photo

SOUTHINGTON - Gov. Ned Lamont paid a visit to Sign Pro on Monday to meet with management, tour the facility and speak to the employees.

Sign Pro invited him in hopes to get his support and that he passes his own law to help local businesses with funding to keep businesses in Connecticut.

“We asked the governor to come today because we are trying to push the Connecticut First (law) with businesses,” said Peter Rappoccio, president of Sign Pro. “We want the state to understand (that), if it’s state-funded money, whether it’s municipal or state money, that we try to use a preferred vendor in the state … who’s in good standing versus using an out-of-state contractor.”

“These are the types of companies for the future of Connecticut; small enterprising startups like this,” Lamont said. “It’s home grown, it’s creative, with 60-plus young, enterprising folks.”

Sign Pro has 68 full-time employees, most of whom are from Connecticut, but some relocated from states including Ohio, New Jersey, New Hampshire and Maryland.

The company’s motto is “Hire for Attitude, Train for Success,” which it firmly stands by.

“I love what they said about how they hire,” said Lamont. “That’s a really good motto.”

Lamont said he loved the 46,000-square-foot facility and admired the work Sign Pro does. He received a closer look at the graphics room, fabrication shop, design studio and wrap install.

“This is the coolest damn company around. It’s amazing; you even make brew trucks. Look at the creativity on the Coca-Cola sign; look at some of the electronic billboards,” Lamont said.

“We were just thinking out loud, ‘Why do we have these grumpy old green metallic signs when you drive into Connecticut?’” Lamont said. “Maybe SignPro can do something to jazz up our image a little bit and bring it to life.”

The company moved from Stanley Street in New Britain to the new facility on 60 Westfield Drive in Plantsville five years ago.

It was founded in 1990 by Rappoccio. He was pursuing his degree in business management and, while working for a construction company, was given the task to find a signage company to letter company equipment and vehicles, but wasn’t able to find one. That’s when he decided he found his calling. He strongly emphasizes quality and service in every aspect of his business.

“We just built the New Britain bridge,” said Rappoccio. “We built the enclosure, all the bumblebees and the sculpture. [Mayor] Erin Stewart will be doing that dedication on the 19th.”