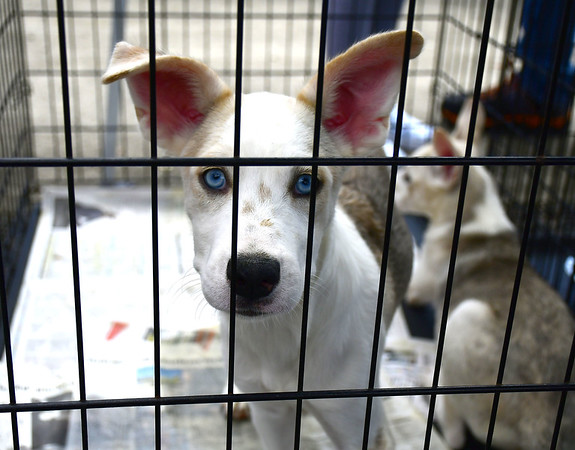 SOUTHINGTON - There were treats for both people and dogs at the second annual Bark BQ Party to Benefit Help Willy’s Friends Saturday at Agway.

The humans could dine on burgers and pizza from food trucks while their canine companions munched on a variety of dog delicacies.

The biggest treat of all, however, was the opportunity for visitors to find a new addition to their families and for animals to find their forever home.

Eight rescue centers were represented at the event. Many brought animals to be put up for adoption.

Bergantino said the event is especially important for the cats and dogs because it’s “giving them another life, another home, another chance to be loved.”

In addition to the adoption drive, all the proceeds from the event go to Help Willy’s Friends, a nonprofit that collects food and supplies to give to shelters and also helps pay for spaying and neutering.

Founder Mark Paturzo said the group gathered 100,000 pounds of food last year alone and have spayed and neutered 750 animals over the course of the charity’s 13 years.

“Every year we collect more food,” he said. The nonprofit began when Paturzo and his wife rescued their dog Willy in 2003. They did their very first food drive at Agway in 2006.

Now, over a decade later, they’re back at Agway and still doing all they can to help animals. Paturzo said he was thankful to everyone there Saturday for their support.

Bobbi-Jo Evans, founder of Tail to Paw Animal Support, shared Paturzo’s passion for helping animals. The main mission of her group is to help with pet care and pet medical needs so animals can stay in their homes.

“We strive to make sure no animal is left behind,” Evans said. “Rescuing is beyond important.”

Tail to Paw Animal Support got its start when Evans helped a deaf cat named Smudge who was burned from the tip of his tail to the tips of his paws get medical care.

Smudge soon paid back the love and care he got when he comforted his previous owner through an illness.

The stars of the show were the cats and dogs hoping to find a family. There was no shortage of them at Agway Saturday.

Where the Love Is Animal Rescue, of Hamden, brought in four dogs to be put up for adoption.

“This is the first event for all of these guys,” said volunteer Kim Macbain. “We’re always looking for volunteers and fosters in addition to adopters.”

The Halfway Home Rescue in North Haven also brought in several dogs in hopes that they find forever home.

Farrimani’s mother, Lisa Farrell, said her son had been hoping to get a dog for two years, but wasn’t able to because he was in law school. Then, when the time was right to get a dog, Farrell and her son looked everywhere, but kept coming back to Brooklyn.

“That’s your dog,” Farrell said she told her son, adding that the puppy is docile and not skiddish.

From the smiles on their faces, it seemed to be worth the wait.