Brian Johnson Staff The Southington Town Council at their May 13 meeting. Buy this photo 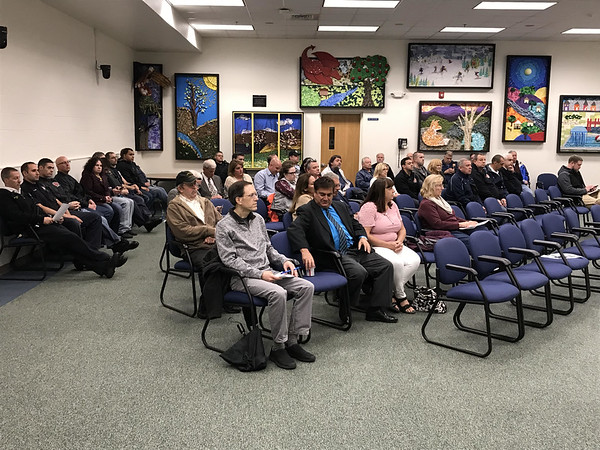 SOUTHINGTON -Following a lengthy and heated debate and several reductions, the Town Council ultimately passed a budget with a 0.16-mill tax increase.

The meeting saw extended, at times partisan, debates over a variety of line items.

The General Government budget passed at $54.16 million, with councilors Dawn Miceli and Chris Palmieri abstaining from the vote and all others in favor.

The Board of Education budget passed at $98.82 million, with councilors John Barry and Dawn Miceli voting against it.

“I was disappointed from the start with the Board of Education budget,” said Miceli. “For the board to present a 5% increase and exorbitant raises I can’t support it. I also don’t appreciate their argument that said we need to increase spending because education has not been properly funded. Councilor Mike Riccio has suggested that we need to have a consultant look at the Board of Education spending plan.”

Councilor Kelly Morrissey also criticized the Board of Education, saying that she wanted to see it become more efficient with its budget. She suggested the board review its spending monthly. However, she ultimately voted in favor of the education budget.

Councilor William Dziedzic voted in favor of the Board of Education budget, but said he was “frustrated” by it. He said he could not take the risk of programs for kids being cut to compensate for reductions.

The cuts that were made included the elimination of the assistant town manager position. This decision was made 5 to 4 with the council’s Democratic majority in favor and the Republican minority opposed.

Republican Councilor Mike Riccio argued that the position was necessary in case something happened to the town manager.

Councilors John Barry and Miceli proposed hiring a single new firefighter instead of two recommended by the Fire Commission, but this motion was defeated 7 to 2.

The council then approved 7 to 2 the hiring of two firefighters as recommended by the Fire Commission.

Miceli said that although she supports public safety, she would prefer to review the data after one new hire and see how this impacted firefighter overtime.

Several reductions were made to the fire department budget, which were identified as possible savings areas by the fire chief.

The budget for fire equipment was reduced by $15,000, after a 7 to 2 vote with Riccio and Triano opposed.

The budget for firefighter overtime was reduced by $50,000 by unanimous vote.

The interest on investments line item of the budget was increased from $1 million to $1.1 million. Barry said that this was a result of increased revenues from Grand List growth and had been recommended by Finance Director Emilia Portelinha.

Riccio said that revenues can’t be guaranteed and accused the Democrats of using “smoke and mirrors” during an election year. He said that the town was not aggressively pursuing economic development like it did two years ago.

The town voted unanimously to reduce its self-insurance contributions by $48,000 for the town and $152,000 for the Board of Education.