Brian Johnson Staff Sarah Meade, a junior at Southington High School speaks in favor of the ordinance to increase the Tobacco and Vaping age in town to 21. Buy this photo 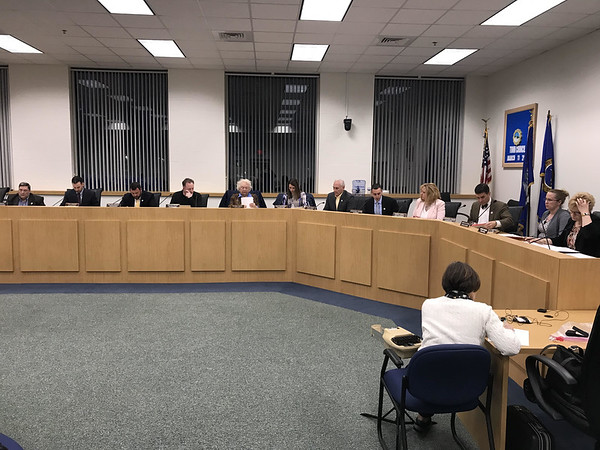 Brian Johnson Staff Bryte Johnson, state director of government relations from the American Cancer Society speaks in favor of the ordinance to increase the Tobacco and Vaping age in town to 21. Buy this photo

SOUTHINGTON - The Southington Town Council voted 8 to 1 in favor of approving an ordinance that will increase the legal age of tobacco and vape use from 18 to 21.

The ordinance will also requires vendors to renew a license annually.

The vote was approved after press time Monday, following a public hearing. Councilor Mike Riccio was the dissenting vote.

During the meeting, Town Attorney Carolyn Futtner explained that retailers who sell vape and tobacco products will have to register annually for a license. If they are found to be selling these products to people under 21, they can be fined. The fine can increase if the vendors are found to be in repeated violation of the ordinance. If the violations continue, the retailers could lose their license to sell these products in town.

The ordinance was put forth by the STEPS Coalition, an organization dedicated to preventing youth substance abuse. Council Chairman Chris Palmieri is board chairman of STEPS and councilor Tom Lombardi is also a member. Palmieri, who is also assistant principal at DePaolo Middle School, had said that even in the middle schools, there were problems with kids vaping.

One of the reasons for the ordinance is that it would prevent high school seniors from purchasing vape and tobacco products in town legally and giving them to younger students or relatives.

“There was a lot of discussion, but most of us ended up agreeing that it was beneficial to make it a little harder for underage kids to get access to these products,” said Lombardi. “I made it clear that while I don’t think that this will completely solve the problem, it will still help.”

Lombardi added that he convinced the council to agree to modify the ordinance slightly from the original proposal. Originally, it would have also barred retailers who were under 21 themselves from selling vape and tobacco products.

“It said you had to be 21 to get the license, but at 18 you can own a business,” said Lombardi. “You should be able to sell whatever products are legal. STEPS worked hard to create this ordinance and did a lot of research, but after we discussed this element the council agreed to leave that part out. This way, there is a level playing field. We don’t want to punish business owners who are under 21.”

During the meeting, Lombardi also put forth the suggestion that the council discuss and vote on a resolution at their next meeting March 25 which would state that they stand in solidarity against state tolls.