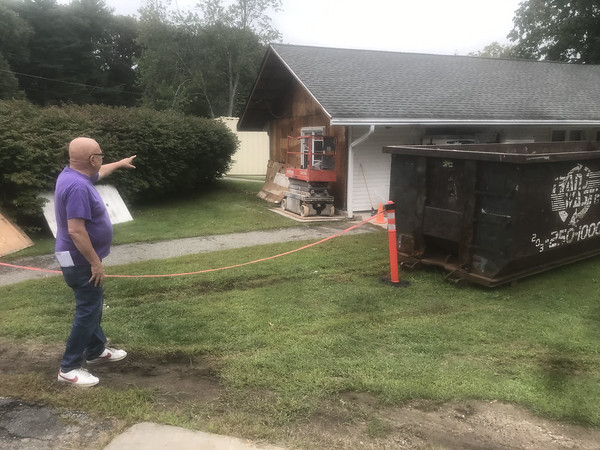 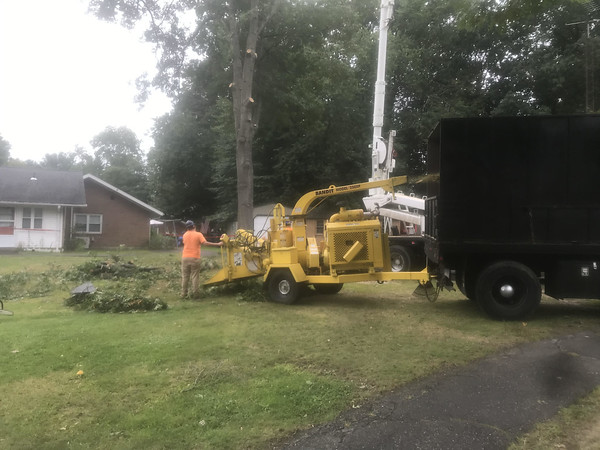 Construction crews were hard at work Monday, cutting down trees and clearing bushes with chainsaws and wood chippers to prepare to double the size of the community room. At the same time, crews were working on an approximately 15 foot addition to Units 1 to 5. These "bump-outs" will make it easier for seniors with wheelchairs to turn around in the hallways. Improvements will also include walk-in showers and larger kitchen spaces.

"Hip hip hooray," said Vinnie Klimas, Plymouth Housing Authority Chairman. "After seven-and-a-half years of planning and grant applications, we have finally come to this point. We're not building new units, but our existing units will be much bigger. Improvements will be made to the six end units."

Klimas recalled sitting with residents at the picnic table near the community room to discuss the initial planning for the project. He thanked state and local officials, including current Mayor Joe Kilduff, past Mayor David Merchant, this city council and previous city councils for their support throughout the project’s history.

"The whole time you’re working on it, you never know if the rug is going to pop out from under you. Luckily, that didn’t happen,” he said.

Construction crews will be working each day, starting at 9 a.m., until the work is completed. Some residents have been coming out to watch the work taking place. For the two months that this construction is underway, eight residents were relocated to idle capacity units, with the state reimbursing moving costs.

"The residents were a little nervous at first, but everything went over smooth as glass," said Klimas.

Klimas plans, in the near future, to invite Gov. Ned Lamont, Department of Housing Commissioner Sella Mosquera-Bruno and Mayor Joe Kilduff to hold a groundbreaking ceremony.

Gosinski Park was originally built in 1965 and additional units were added in 1968. The project will see six units become fully ADA accessible, while another 54 units will also see “substantial” renovations.

. $2,509,725 from the Department of Housing State Sponsored Housing Portfolio through the Connecticut Housing Finance Authority,

. $2,300,000 in Department of Housing Community Development Block Grant funds through the town of Plymouth

. $50,000 from American Rescue Plan Act (ARPA) funds allocated to the Town of Plymouth

. $278,000 in Department of Housing Predevelopment Loans