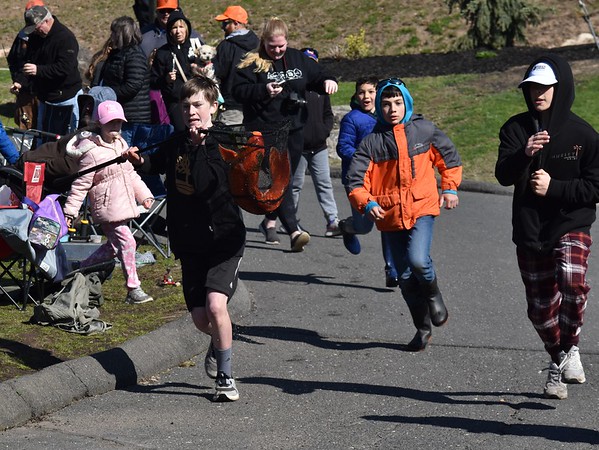 Dean Wright | Staff Daniel Kane runs with his koi fish to get it measured as the largest fish of the derby. Buy this photo

Bristol Parks, Recreation, Youth and Community Services stocked the pond with several hundred trout in Page Park Pond for families to catch, some of those being “golden trout” which earned special rewards for those lucky enough to find them.

“Last year, we didn’t have any trout caught and this year we’ve had a good amount of trout caught and a golden that was 13 and a half inches,” said Parks, Recreation, Youth and Community Services Recreation Division Supervisor Amry Shelby. “It’s a great and relaxed family event to come and enjoy.”

That gold trout was caught by Keira Osak.

Families measured their fish at a nearby pavilion, one named after Perry Spinelli, Shelby said, who was the originator of the fishing derby. Fish were then released back into the pond.

A variety of prizes were offered for different catch categories, such as first catch and biggest catch. The first three fish a participant caught counted towards winning prizes as well. Some of those prizes were local business gift cards or fishing equipment.

Families signed up to fish around 6:30 a.m. with the derby kicking of 7 a.m. and then ending at 10 a.m., although, Shelby said, families often do and are encouraged to make a day of fishing after the derby. Smaller derbies were also held over the course of the main derby for around 10 minutes each and fishers could win prizes for the first fish caught within those specific time periods.

Daniel Kane, 13, had a fish on his line during a 10-minute derby before soon realizing what he had on the other end was harder to bring in than his others. After a several minute process, he netted what was eventually measured to be a 28-inch orange koi fish, the largest fish caught that day.

“I was really surprised and it feels great,” said Kane. “I’ve been trying to catch a fish like that for a while, especially the koi. I’ve seen them in here a while but never caught them before, but today it happened.”

The young fisherman said he cast a line with a small piece of corn.

“I saw it feeding on the bottom. When it ate, it probably ran out maybe 100 feet, was jumping and everything,” said Kane.

He said with a small rod, like the one he had, he had to loosen the drag lightly. He also described the rod as “bendy, so when the fish ran the hook wouldn’t come out because it had a lot of give.”