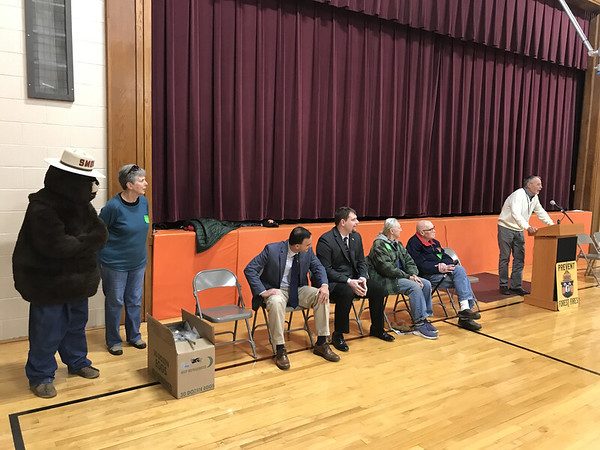 PLYMOUTH – Town leaders and Smokey Bear taught children at Fisher Elementary School about the importance of trees Friday in celebration of the 150th anniversary of Arbor Day.

Sandshaw said that the town’s Arbor Day event is typically just done with fourth graders as “fourth grade farmers,” but due to being canceled the past couple of years for the pandemic, more grades were included this year.

“Today is the 150th year Arbor Day is being celebrated,” said Sandshaw. “It was started in 1872 in Nebraska by Julius Sterling Morton.”

After sharing the history of the holiday, Sandshaw introduced Smokey Bear – prompting excited cheers from the children. Sandshaw told them that The Department of Energy and Environmental Protection (DEEP) had “let him out of hibernation.” Smokey Bear handed each child present a seedling to take home and plant after the assembly.

“He is giving you each a root that’s about 12 inches long in a plastic bag,” explained Sandshaw. “Dig a hole, put in some compost and water and fill it in and then watch it grow. Some of these seedlings can grow up to nine feet tall.”

Sandshaw then introduced Kilduff, who said he was “thrilled” to speak with students in the local school system.

“Trees are important because they provide air for you to breathe, they are used by animals and they provide energy for homes,” he said. “A lot of buildings are built out of wood. Trees provide a vital use for consumption and also for nature and the environment.”

When Falcone took the podium, he asked children to share their knowledge of trees with him. One student shared that when a tree is cut down, one can look at the number of rings in the trunk to tell how old a tree is.

“When you plant the seedling, you are making a difference for the environment,” Falcone told students. “Think about other ways that you can make a difference in the community, at your schools and at home.”

When it was her turn to speak to the students, Dowd told them that she too once attended Fisher school. She also shared some additional information about the history of Arbor Day.

“A fellow in the Nebraska territory, Julius Morton, heard a lot of pioneers that had settled in the area complaining because they were disappointed that the land was all prairie,” she said. “A lot of them were used to climates where there were lots of trees. So, they decided that they would have a tree planting day. The first time they did it, they planted more than one million trees. That day became Arbor Day. A lot of other neighboring states were aware of this and it caught on. It was eventually named a holiday.”

Children were allowed to ask Dowd questions, one of which was what her favorite type of tree was.

“I like all trees, but if I was forced it would probably be some kind of fruit tree,” she said. “They have multiple uses, providing shade, fuel and food.”