'It would be a miracle if we were alone': Mutual UFO Network analyst captures images of deep space, some explained, other's not, from his home in Terryville

Orion Nebula at bottom and Running Man at top. Part of the same region as the Horsehead nebula known as the Orion Molecular Cloud Complex. -Photo submitted by Marc Dantonio Buy this photo

SkyTour LiveStream West instrument on the permanent Pier. Camera on front of the telescope, gives us a 2 degree by 1.5 degree view. (4 full moons across by 3 full moons tall) -Photo submitted by Marc Dantonio Buy this photo 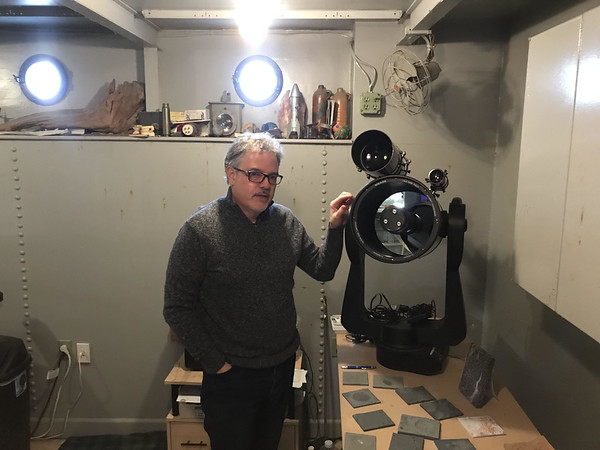 Brian Johnson Staff Marc Dantinio with one of his telescopes. Buy this photo

Horsehead Nebula in Orion near left star in the belt. Alnitak is at top center of the image and to the left is the flame nebula that glows because of Alnitak. Below Alnitak is the Horsehead nebula, a dark nebula that is silhouetted by a bright nebula behind it. -Photo submitted by Marc Dantonio Buy this photo

Pleiades Stack. The Pleiades, also known as seven sisters in Taurus. Hot blue stars moving through a dust cloud that is actually moving in a different direction than the stars, indicating that the stars were not born there but somewhere else and are in effect just passing through. -Photo submitted by Marc Dantonio Buy this photo

PLYMOUTH – A local astronomer and UFO researcher has been live streaming images of deep space captured by his telescopes and has been inviting the community to come and watch them.

Marc Dantonio has two telescopes, one which he operates from his home in Terryville, and another which is set up at an observatory in Arizona and feeds into his home computer. With these, he is able to peer out into the depths of space and capture clear images of distant nebulas and other objects.

Dantonio first became interested in space when he was 9 years old. He sent NASA JPL (Jet Propulsion Laboratory) plans he created for a space station. In recognition of his efforts, he was sent back a “space box” with model kits, books, mission pamphlets and other materials to help further his interests.

Later, Dantonio would go on to create FX Models, which produces visual effects miniatures for the film and television industry. He also produces high-end miniature models for the U.S. Navy, working with General Dynamics and Electric Boat.

In 1971, he joined MUFON (Mutual UFO Network), a nonprofit organization established in 1969 to study reported UFO sightings. In 2008, he became the group’s Chief Photo/Video Analyst. In this role, he examines supposed UFO videos and photos, looking to see if he can find a scientific explanation for what people have seen. He has also appeared on several television shows, taught virtual classes for students in Bangkok, and traveled around the country and to other countries, such as Norway, to speak on the subject.

“I have known Marc for 12 to 15 years,” he said. “He has always been my go-to guy for complex evaluations.”

Three years ago, Dantonio established the “Skytour Livestream” on YouTube, which has since gained more than 5,500 subscribers. When people tune in to watch his videos, Dantonio said the reception has been very positive.

Dantonio described some of the objects which people commonly mistake for UFOs.

“Everyone is taking photos with their night vision cameras and they’re blown away by what they see,” he said. “Sometimes what they see are insects, which move with erratic behavior. Other times they see bats, which can turn on a dime, or satellites.”

However, Dantonio said, there are still some things he has seen for which he has no explanation. One was “Oumuamua,” a “pancake shaped” object that was sighted moving through the solar system in 2017. The object’s movement, he said, “did not follow physics” or follow standard ballistic trajectories. Harvard astrophysicist Avi Loeb, he said, theorized the object could have been an alien craft.

Dantonio also described a time when, due to the work he did for the U.S. Navy, he was invited aboard a submarine. He said this happened “decades” ago but he could not disclose the exact date. While aboard, the ship picked up an object moving “several hundred knots.”

“They couldn’t classify it, but they referred to it as a ‘fast mover,’” Dantonio said. “The executive officer said to log it. I got the impression that they had seen it more than once. We’ve spent years trying to perfect fast travel underwater. The Russians were the first to notice these ‘fast movers.’ They didn’t know what they were and we don’t know. It’s everybody’s consensus that they are not from here. We can’t do anything about them and we can only observe them.”

Dantonio said he believes no terrestrial technology is capable of moving like UFOs. He believes they are hiding underwater in the Earth’s oceans as they study humans.

“It is impossible to me that life would not exist anywhere else in the universe,” he said. “There are two trillion observable galaxies. It would be a miracle if we were alone.”

When Dantonio was at Wesleyan University, he said talking about UFOs was considered “taboo” among astronomers.

“I walked into the department director at the time and told him that I think we live in a populated universe,” Dantonio said. “At the time, I was told to ‘get back to the observatory and leave Captain Kirk to us.’”

In 2021, the government released a report acknowledging that UFOs exist. But this was not the first thing to cause a shift in attitudes among academics.

In 1988, the first “exoplanet” – a planet that orbits a star outside of our local solar system – was discovered. This, he said, lent additional credence to the idea of alien life.

“I went back into his office after I graduated and he told me ‘it was only one planet,’” Dantonio said. “Since then, we have found almost 5,000 such planets.”

In 2020, Dantonio would later release a book titled “The Populated Universe” to detail his theories.

Dantonio has several theories about how aliens might have evolved. The basic building blocks for life, carbon, hydrogen, oxygen, etc. can all be found in space.

He said carbon based life forms, including most animals on Earth, are born with symmetrical limbs, for example. This, he said, may be coded at the genetic level and may be present in other life forms.

He went on to say that humans evolved from mammals after several extinction events on Earth. If evolution took other paths on other worlds, then other types of animals might have evolved to develop sentience. He gave the example of the Troodon, which he said was one of the smartest dinosaurs and was evolving larger and larger brain capacity.

Humans, he said, may not be done evolving either. He brought up the phenomenon of “Quantum Entanglement” or what Albert Einstein dubbed “spooky action at a distance.” Einstein discovered if one observes a particle in one place, another particle, even light years away, will change its properties as though the two are connected. He related this to a phenomenon that people sometimes describe as a psychic connection.

“I was once talking in Arkansas to a room of 800 people and asked them, ‘how many of you have thought about a friend that you’ve never seen in years and, moments later, that person calls,’” he said. “Every hand in the room went up. Science says that is a coincidence, but I think it is more. I think it is quantum entanglement.”

Dantonio theorized that, in the future, humans will be able to evolve to connect to each other mentally, over great distances, without the use of cell phones. Aliens, he said, may be at similar advanced stages of evolution.

Among the numerous reports of UFOs and aliens he has received, Dantonio also described “flaps” where more than one person makes mention of an object or being with similar traits.

One example is the Phoenix Lights which were seen in 1997, where multiple people reported seeing a boomerang shaped craft. Another, he said, is how many people report to have seen thin, grey aliens with black eyes. He hypothesized these aliens were studying humans like a zoologist might study animals. He also suggested some aliens might be what he referred to as “biological robots” – clones that are grown and then trained to perform one specific task.

“It would be like if we cloned ourselves and made our clone clean the house all day,” he said. “Obviously, we would consider that to be cruel. But we can’t expect an alien species to necessarily follow our sense of morality.”

Overall, Dantonio said he is an astronomer who doesn’t dismiss the idea of aliens outright but who wants there to be scientific proof. He said many claim to have made contact with aliens, but he can’t believe them outright without evidence.

As a child, Dantonio said he experienced a “missing time event” – being unable to remember what occurred during a block of time. Many attribute these events to alien abductions.

One alien theory Dantonio dismisses, he said, is the idea Bigfoot is an alien.

“If he exists, I think he’s an Earth animal that is too small in number to be easily found,” he said.

The idea of aliens coming from a “Hollow Earth,” he said, originates from what appeared to be trenches or holes being spotted in footage of Antarctica. This, he said, can be explained by “data gaps” in the footage.

Others theorize aliens could come from parallel dimensions. This is part of a scientific theory known as “multiverse theory.”

“Academia does not dismiss the idea of parallel universes,” he said. “Scientists have found that the big bang couldn’t have happened the way that it was originally presented. There isn’t enough mass to create the entire universe.”