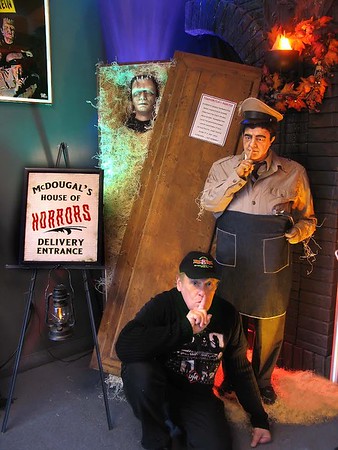 The new set piece was unveiled this past Thursday at The Witch's Dungeon Classic Movie Museum at 103 E Main St., which features more than 25 life-sized figures of several classic horror and science fiction characters as well as original movie props. This latest addition features Costello as Wilbur Grey when he discovered The Frankenstein Monster in McDougal's House of Horrors.

"People who came this past week were surprised to see it," said Museum Owner Cortlandt Hull. "It was very loved by the fans. A lot of them told me that it brought them back to seeing the movie in their childhood."

In the earlier portion of the film, Costello's character was always the one to encounter the monsters and call to his partner in the comedy duo, Bud Abbott, playing Chick Young. By the time they returned together, the monster was always gone - only to inevitably return when Abbott's character stepped away.

The film was produced toward the latter end of the classic Universal Monsters franchise and its success would lead to Abbott & Costello Meet the Invisible Man in 1951 and Abbott and Costello Meet the Mummy in 1955.

Hull said that the figure of Costello was donated by Dwayne Whitehead to the museum. The wax bust of Glenn Strange as The Frankenstein Monster was created from the life cast of Strange's head with the makeup on.

"My friend John Chambers (the famous make-up artist), said that he felt that this was the back-up head used at the end of the film when the Monster is on the burning pier," said Hull.

The signs from McDougal's House of Horrors were accurately recreated by Steve Matthews aka Argyle Goolsby of the horror punk band Blitzkid. Matthews has frequently assisted Hull with The Witch's Dungeon in recent years and was married at the museum in 2017 when it was located in Bristol.

Matthews also provided some additional information on how the new set came to be.

ŌĆ£Cortlandt told me that heŌĆÖd had that bust because John Chambers was able to save it from being thrown away at Universal. When Dwayne donated the Lou Costello figure, which was based on LouŌĆÖs life cast, I sort of put two and two together and said ŌĆśwhy donŌĆÖt we try to build an Abbott & Costello Meet Frankenstein set?ŌĆÖ ŌĆØ

Matthews said that he is very happy with the final results.

ŌĆ£We did everything we could to embellish it as much as possible, with a close attention to detail to really capture the film,ŌĆØ he said. ŌĆ£We tried not to cut any corners.ŌĆØ

Matthews acquired a coffin to stand up the monster head prop in like the shipping box seen in the film. He also procured the same type of Excelsior packing material, made from aspen wood, which was used in the film.

ŌĆ£It was used in lieu of Styrofoam and itŌĆÖs not as common today,ŌĆØ said Matthews.

Hull added that Abbott & Costello have always been special to him and that he is glad to have this addition to his museum.

"I was very ill when I was a little kid and watching Abbott & Costello movies always lifted my spirits," said Hull. "Abbott & Costello Meet Frankenstein was always my favorite. I once wrote to Bud Abbot and he sent me a silver skull and crossbones pin which I will also be putting on display."

Hull encouraged anyone who is a fan of Abbott & Costello meet Frankenstein to visit and have their photo taken with the set piece, which can be found in the museum lobby. In the future, Hull said that he may also have a display dedicated to 1953's Abbott and Costello Meet Dr. Jekyll and Mr. Hyde

Matthews said that Abbot & Costello Meet Frankenstein is the most popular film of the comedy duo and also serves to introduce people to the film franchise.

ŌĆ£ItŌĆÖs the one that really resonated with people the most,ŌĆØ he said.

People can call 860-584-8306 before 4 p.m. to make a reservation to tour the museum. The museum is open year-round Friday through Sunday from 6 to 9 p.m. For more information, visit preservehollywood.org.