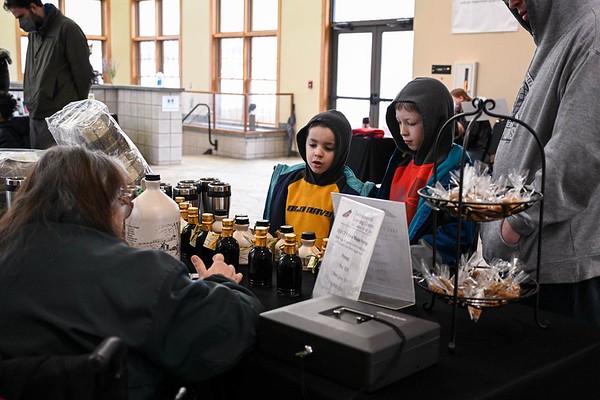 Photo courtesy of Britni Pastyrnak Fern Vaugn, at left, visits with guests at the gift shop table. Buy this photo

“It’s sort of like a celebration of spring because things start to warm up and we know that because we’re getting sap out of the trees and we’re making maple syrup. It’s a great time to have people come up here to Indian Rock Nature Preserve to enjoy some delicious pancakes made by volunteers,” said Scott Heth, executive director of Environmental Learning Centers of Connecticut.

In addition to the meal, visitors were able to glimpse how maple syrup was made in the preserve’s sugar house as well as how Native Americans made it. Bacon and sausage were also served at the event along with maple candy and cookies.

The preserve tapped around 60 sugar maple trees. The sugaring season starts around mid-February, said the director, and lasts until the end of March in a roughly six-week period.

“We need to have freezing nights and thawing days, so below freezing at night and a nice and sunny 45 degrees during the day,” said Heth. “That creates a pressure gradient inside the tree greater than the atmospheric pressure outside the tree so the sap actually comes out. Even if you drill a hole in the tree, if you don’t have those conditions, the sap is not going to come out.”

The sap of a sugar maple contains around three percent sugar and much of the sap is evaporated to create maple syrup by boiling.

“It’s about 40 gallons of sap to one gallon of syrup,” said Heth. “We have about 80 taps and I don’t like to put more than two taps into a tree. Each tap, traditionally over the season, will produce a quart of syrup. We’ll make up to 20 gallons.”

The preserve’s syrup is primarily sold as a fundraiser. Proceeds are used to support environmental education and programs.

Mobile Maple One, as the organization sugar shack is called, produces all of the preserve’s syrup. Volunteer Bill Pastyrnak was boiling sap in the shack during the event.

“We’re boiling this down and our end product is 66% sugar,” said Pastyrnak. “Water boils at 212 degrees (Fahrenheit). Sap boils at 219 degrees. . . The boiling process can be anywhere from eight to 10 hours. ”

Syrup will be filtered to separate tree debris from the end product. Boiling it down further from syrup will produce maple sugar.

Leila Agoora, preserve volunteer coordinator, said she felt the day was a good one and thanked the volunteers who came to help in the event.

“All of our events can’t be what they are without them,” she said.

Jamie Fournier, preserve volunteer but present as a patron at the breakfast, said she felt the event was a great opportunity for the community to support the preserve. She said she pitches in wherever she can and has been volunteering with the preserve for around two years.

Kirsten Tomlinson, director of education at ELCCT, helped guests learn how to identify a sugar maple.

“We can use leaves during the summer and fall but this time of year we have to look at other things because they don’t have leaves, so we look at the bark, buds and branching patterns of the tree,” she said. “It has rough bark, and on a sugar maple tree, underneath the cracks, you can see it kind of looks a bit orange in color.”

Sugar maple leaves possess five lobes and have paired buds and they are typically dark and pointed. Maple trees have opposite branching patterns.