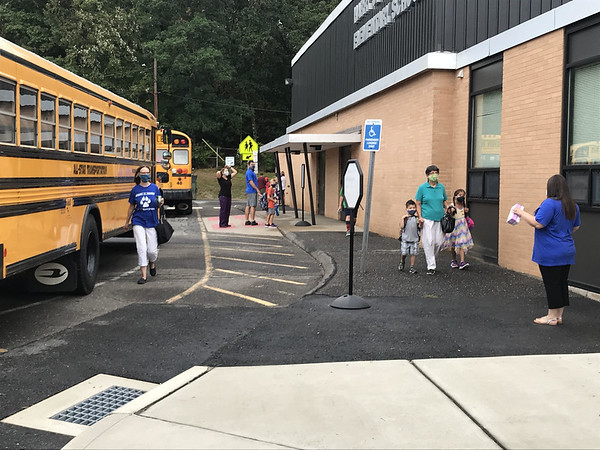 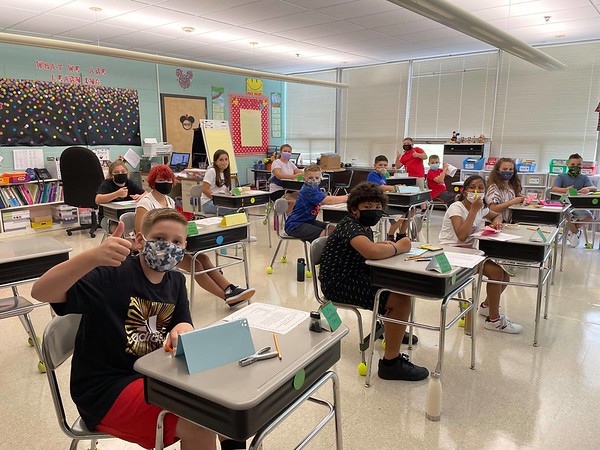 Students at Fisher Elementary School during their first day back in 2021. -Plymouth Public Schools Buy this photo

PLYMOUTH – Students returned to school feeling excited and enthusiastic Monday, with local educators vowing to encourage them to make friends and build back a sense of community.

It was a cool, cloudy morning as parents’ cars and school buses pulled up for the first day of school. As youngsters hopped out of their cars, sporting new backpacks and walking to the building holding their parents' hands, they were greeted by their teachers who welcomed them back.

Despite their children still having to wear masks, parents were overall grateful to have their kids returning to learn in person and socialize with their peers.

“She has been missing playing with her friends,” said Monica Hunt as she dropped of her first-grader daughter Summer.

Raquel Britt, whose sons Sebastian and Gabriel are entering fourth grade and sixth grade respectively, said she is pleased with the precautions schools have taken.

“I’m glad that they’re able to come back to nice clean, safe schools,” she said.

Tracey Graziano, who was bringing her son Logan in for his first day of first grade, was glad that her son would be able to see his peers again and benefit from in-person learning.

“It’s good to have him coming in to school,” she said.

Superintendent Brian Falcone said that he was looking forward to students having an “awesome” school year.

“I visited each school this morning and it was great to see smiling faces at all age levels,” he said. “Students were excited to be there and our teachers and administration was excited to be back. We did a great job preparing for the opening of schools to make it as normal as we can for students who return.”

Falcone said that while addressing learning loss which occurred during the pandemic is a priority, the priority of the first few days in the district will be to address the “emotional piece” of reconnecting kids with school.

Fisher Elementary School Principal Kim Loveland said that the first day went “really well” and that kids are excited to be back with friends. This is the first year that the school has become a grades 3 to 5 school.

“Teachers have been working hard to create a school climate to encourage students to make new friends this year,” she said. “They’ll be doing a lot of work in their classrooms around community-building activities for the first week.”

Sherri Turner, principal of the grades K through 2 Plymouth Center School, said that everyone was excited to be back.

“We had all of our staff members who were not assigned to a classroom come out to meet the kids as they got off the bus and escort them,” she said. “I think that the parents were happy to see them returning to school.”

Angela Suffridge, principal of Eli Terry Middle School said that parents dropping off their kids had smiles on their faces as they encouraged them to have a good first day.

During the first three days, Eli Terry Middle School will be focused on giving students in home rooms a chance to get to know each other and their teachers. Suffridge said that the goal is to return to a sense of normalcy.

“We’ll be doing interest surveys, revisiting norms and routines and doing school pictures,” she said. “We want to encourage teambuilding and making connections. We want to establish a sense of belonging with our students and we want them to think of our school as a safe place.”

Michael Hults, principal of Terryville High School, said that students were excited to be back. As the high school moves forward this year, he said that the mantra will be “ready to learn, ready to thrive.”

“Our staff pulled together over the summer to make sure that we kickoff the school year right,” he said.

Like at the Middle School, Terryville High School will also focus its first few days on rebuilding social opportunities for students.

“Our staff put together activities today to rebuild the sense of high school community and culture that we lost this past year-and-a-half,” he said. “We felt that we needed to help re-establish those relationships.”