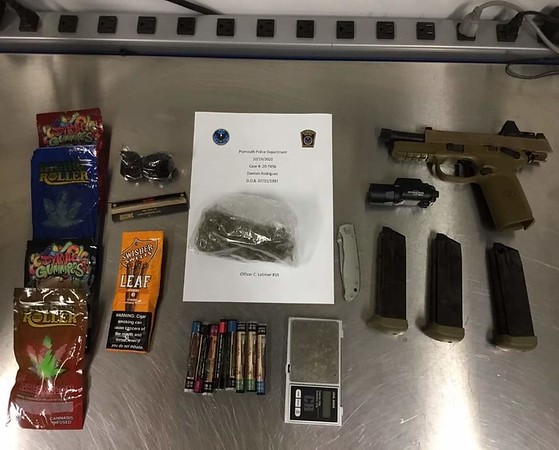 Photo courtesy of Plymouth police Police seized a gun, high-capacity magazines and over 300 grams of marijuana during a traffic stop this week. Buy this photo
Published on Thursday, 22 October 2020 15:33
Written by JUSTIN MUSZYNSKI

PLYMOUTH -- Police seized more than 300 grams of marijuana, a gun and high capacity magazines during a traffic stop this week.

According to police, an officer on Monday, around 9:13 p.m., pulled over a vehicle on Cedar Street because of an equipment violation. Police said the officer saw a gun and drugs in plain view.

Officers seized a total of 322 grams of fresh marijuana, edibles and vape cartridges, in addition to a .45 caliber handgun -- which was able to be modified to fit a suppressor -- and three high-capacity magazines.

Rodriguez, the driver, was initially held by police on $25,000 bond. He was arraigned Tuesday in New Britain Superior Court, where he was freed on a promise to appear, according to judicial records.