Area cities, towns to honor those who lost their lives on September 11 with several ceremonies, with details on those events

A worker removes the American flags after the ceremony as a beam of light is seen over the Pentagon, as part of the Towers of Light Tribute marking the 19th anniversary of the 9/11 attack on the Pentagon, Wednesday, Sept. 9, 2020, in Washington. (AP Photo/Jose Luis Magana) Buy this photo 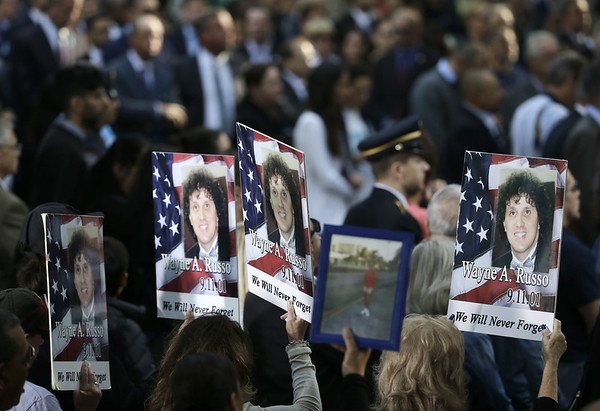 FILE - In this Sept. 11, 2017, file photo, people hold up signs with the names and pictures of victims of the 9/11 terrorist attacks during a ceremony at ground zero in New York. The coronavirus pandemic has reshaped how the U.S. is observing the anniversary of 9/11. The terror attacks' 19th anniversary will be marked Friday, Sept. 11, 2020, by dueling ceremonies at the Sept. 11 memorial plaza and a corner nearby in New York. (AP Photo/Seth Wenig, File) Buy this photo

FILE - In this Sept. 11, 2014, file photo, a woman places flowers in the inscribed names along the edge of the North Pool during memorial observances on the 13th anniversary of the Sept. 11, 2001 terror attacks on the World Trade Center in New York. The coronavirus pandemic has reshaped how the U.S. is observing the anniversary of 9/11. The terror attacks' 19th anniversary will be marked Friday, Sept. 11, 2020, by dueling ceremonies at the Sept. 11 memorial plaza and a corner nearby in New York. (AP Photo/Justin Lane, Pool, File) Buy this photo

NEW BRITAIN ŌĆō ItŌĆÖs been 19 years since the tragedy that occurred on September 11, 2001, and while everyone is currently in the midst of another unprecedented time, many local towns are still hosting events to commemorate the day and the lives that were lost.

ŌĆ£Tragedy not only impacted our nation on that day 19 years ago, but it affected so many families who live here in Connecticut and had loved ones taken from them all too tragically,ŌĆØ Gov. Ned Lamont said. ŌĆ£We will forever remember each of those whose lives were taken all too soon and honor the heroism of the first responders who courageously put their own lives on the line to protect complete strangers. We also pay tribute to the brave men and women of the U.S. military who serve our nation and protect our freedoms. LetŌĆÖs use this anniversary as a reminder that we are stronger as a nation when we unite together and remain committed to improving our world for the better.ŌĆØ

Friday morning will begin with U.S. and state flags in Connecticut being flown at half-staff from sunrise to sunset. Accordingly, since no flag should fly higher than the U.S. flag, all other flags ŌĆō including state, municipal, corporate or otherwise ŌĆō should also be lowered during this same duration of time.

In addition, the state will illuminate the Pearl Harbor Memorial Bridge in New Haven (the Q Bridge) in red, white, and blue lights beginning at dusk on the evenings of Thursday and Friday.

At 8:45 a.m. the New Britain Police Department, Fire Department and Emergency Medical Services will be holding a remembrance ceremony that will be streamed live on the New Britain Police Department Facebook page. During the ceremony there will be a moment of silence to commemorate each attack on the twin towers, a prayer will be given by NBPD Police Chaplain Thomas Mills, and a singer from New Britain High School will perform the Star Spangled Banner and God Bless America. Bagpipes will be provided by the Police Pipes and Drums of Waterbury.

At 8:46 a.m. Southington town and public safety officials will hold a ceremony at the townŌĆÖs 9/11 Memorial, located at the corner of Summer and Main streets in Plantsville.

At 9 a.m. the Bristol Fire Department will hold its annual 9/11 wreath service at its headquarters located at 171 North Main St.

At 11 a.m. the Northwest Vets group will be hosting a short memorial ceremony at the Central Park War on Global Terrorism Memorial in front of City Hall in New Britain.

Everyone that attends the events is requested to wear a mask and maintain social distancing.

ŌĆ£We will forever remember and never forget the nearly 3,000 lives taken from us so tragically and cruelly - mothers and fathers, sons and daughters, brothers and sisters, friends and coworkers,ŌĆØ Lt. Gov. Susan Bysiewicz said. ŌĆ£In the minutes, hours and days that followed one of the darkest days in our nationŌĆÖs history, we saw courageous acts that reminded us of AmericaŌĆÖs resiliency when we come together as one. Our first responders heroically put themselves in harmŌĆÖs way to save others. Ordinary people risked their lives to take on hijackers. Families turned their unimaginable loss into hope. Today and every day, we honor the memories of all those we lost on September 11, and thank our first responders and military personnel for protecting us and defending our country.ŌĆØ

To pay homage to those who lost their lives at any point you can visit ConnecticutŌĆÖs official 9/11 memorial located on a peninsula at Sherwood Island State Park in Westport. It features a stone engraved with the names of the people with ties to Connecticut who were killed in the attacks. This exact location is where many people gathered in the immediate aftermath of the attacks to observe the devastation in New York City. The site was also used by the Connecticut National Guard in the following days and weeks as a staging area for ConnecticutŌĆÖs relief efforts.