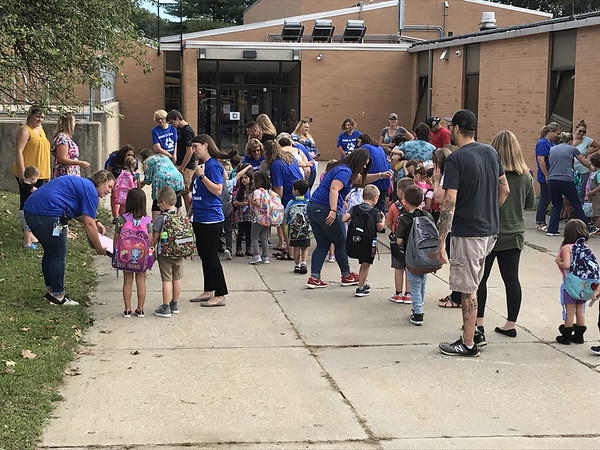 PLYMOUTH - Parents praised Plymouth schools as they dropped off their youngsters at Harry S. Fisher Elementary.

Dressed their best in their back to school clothes and sporting colorful backpacks, many children walked up the big hill leading to the school at 79 N. Main St. with their parents. Others took the bus in, stepping off in the drop-off circle and then joining the other students in front of the school. There, they were greeted by several teachers in blue who helped gather them into their respective classes.

A couple returning students got very excited when they recognized their teacher from the previous year, running over to say hello. Other, older students at the kindergarten to fifth grade school quickly sought out the friends they had spent the summer with and grouped up with them, chatting and waiting for classes to begin.

“We love this school,” said Coderre. “It has a lot of courses for them to take. Lailee loves music and art and Violet is just happy to be in school now.”

Tiffany Oakes said she had two children at the school, Zachary, 5, was going in to kindergarten, while her older son, Brayden, was entering fourth grade.

“I love this school,” said Oakes. “It is quiet and small and the teachers do a good job.”

Sara Donaghy brought along her two daughters, Hannah and Sadie, who were entering kindergarten this year. Also with her was her son, Julian, who started school last year.

Tabitha Voisine and her husband, Jeremy, were dropping off Sophie, 5, for her first year in kindergarten.

“We’re excited; we heard good things about this school,” said Tabitha Voisine. “We know she will be in good hands. Before coming here, she went to preschool at The Learning Center.”

Martin Semmel, superintendent of schools for Plymouth, said that the district had a “great first day.”