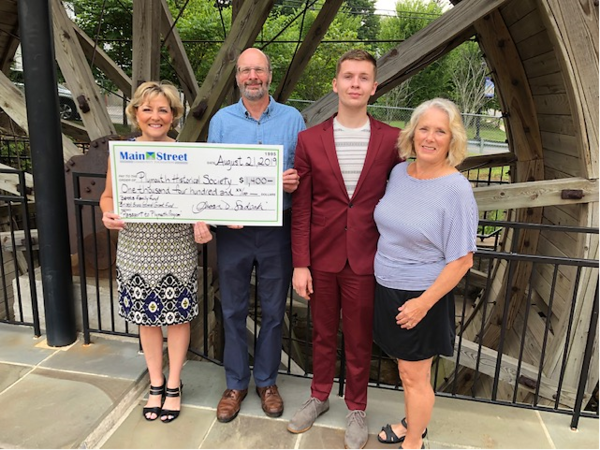 The grant presentation in front of the Eli Terry Jr. Water Wheel, one of the historical site included in the Passport. Pictured is Jerry Milne, Grants Coordinator, and Tom Vaughn, Vice President, of the Plymouth Historical Society along with Susan Sadecki, President & CEO of MSCF, and Jackie Merchant, a MSCF Board of Director and resident of Plymouth. -Photo submitted by the Main Street Community Foundation. Buy this photo

The grant presentation in front of the Eli Terry Jr. Water Wheel, one of the historical site included in the Passport. Pictured is Jerry Milne, Grants Coordinator, and Tom Vaughn, Vice President, of the Plymouth Historical Society along with Susan Sadecki, President & CEO of MSCF, and Jackie Merchant, a MSCF Board of Director and resident of Plymouth. -Photo submitted by the Main Street Community Foundation. Buy this photo

PLYMOUTH - The Plymouth Historical Society is creating a Passport to Plymouth, a 16-page program book with maps, descriptions and photos of 21 interesting sites around town.

A $1,400 grant from the Betts Family Fund and the Bristol Brass General Grant Fund at the Main Street Community Foundation was recently awarded to the Plymouth Historical Society to support the Passport to Plymouth. The society will run the program in partnership with the Plymouth schools.

“We are thrilled to receive this support from the Main Street Community Foundation,” said Jerry Milne, grants coordinator for the Plymouth Historical Society.

Copies will be distributed to every second-grade class, which is when students learn about town history as part of their curriculum. They will also be available to all residents. There will be a digital version at plymouthhistoricalsociety.org, which can be printed.

Milne said that the passport will resemble an actual passport and will include sites that are unusual, fascinating or of historical significance. Some examples include the original town hall, which was purchased and renovated by Helen Nejfelt in 2015 and is now Antiques at the Green; the Eli Terry Jr. Water Wheel, the Lock Museum, a village in East Plymouth that was home to persecuted British loyalists during the Revolutionary War and the Plymouth Burying Ground, the oldest cemetery in town, established in 1747.

“There are 38 Revolutionary War soldiers buried there,” said Milne. “They each have granite slabs which say which unit they served with and when they died.”

“For each site, there will be questions in the Passport that can only be answered by looking for information at that location,” said Milne. “The intent of the Passport is to educate residents in a fun way about the unique heritage of their town, to make them proud to be from Plymouth and to create a sense of place and belonging. The sites were chosen for their historical significance but are also spread all over town so people see places they never knew existed.”

Milne said that the grant will fund the printing of 500 Passports in May 2020. Also in May, he will lead a walk starting on the Town Green during which people can get their questions answered about historic sites. Another walk in downtown Terryville is planned with Milne for the first Saturday in June. Then, on Labor Day weekend 2020, there will be a “Passport Party” with ice cream at the lock museum, where people can get their passports stamped.

Susan Sadecki, president and CEO of the Main Street Community Foundation, said the Passport to Plymouth program is a “great way” to get residents and non-residents interested in learning about town history.

“Plymouth is one of the signature communities that built and designed locks,” she said. “It is very rich with history.”

Mayor David Merchant says that he loves the idea.

“We have a 225th anniversary committee that is putting this together and Jerry Milne is really spearheading this,” he said. “He loves putting together puzzles - he does the escape room at the Lock Museum. I love it. It will be a great thing to get as many people in town as possible involved and to see as many interesting things in our town as they can. It’s exciting to me whenever I see volunteers putting something like this together.”

The Passport to Plymouth is being created in anticipation of the town’s 225th anniversary in 2020. Earlier this summer, a large mural depicting historical and current features of the town was unveiled on the side of the Lee’s Hardware building, also in celebration of the anniversary.