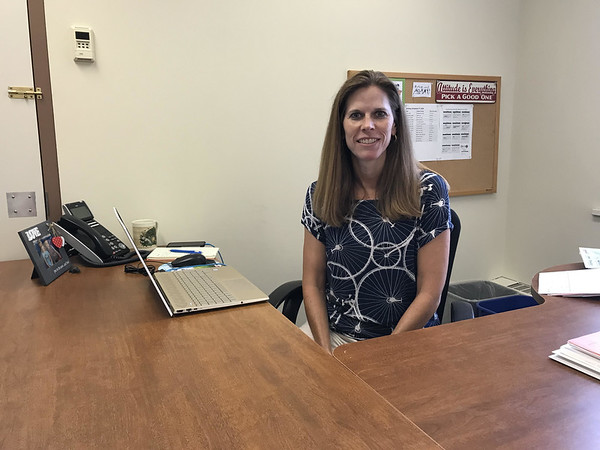 PLYMOUTH - The new Parks and Recreation Director Briana Brumaghim said that she aims to develop five- and 10-year plans to make “the great and beautiful parks we have even better.”

Brumaghim resigned from the Board of Finance to accept the position Aug. 7. Since then, she has been working to wrap-up the summer camp at Fisher Elementary School and get equipment packed up for when kids get back to school. She previously served as interim parks director after her predecessor, Michael Ganem, resigned in May to accept a position as parks director in Southbury. Brumaghim was chosen from four candidates interviewed by Mayor David Merchant and Gerard Bourbonniere, chair of the Parks and Recreation Board.

Brumaghim is no stranger to the Parks and Recreation Department. She has been involved since January 2014, previously assisting Ganem with the town’s summer camp and youth basketball program.

“I like being involved in my own community,” she said. “I have young children and I have gotten to know a lot of parents and kids. I want to make my community an even better place to live.”

During her time in the interim position, Brumaghim spoke to many maintenance staff members who she had previously gotten to know to learn the status of local parks and projects.

“My goals include seeing through two projects that Michael Ganem started this past spring,” said Brumaghim.

One of these projects, she said, is to work on the town’s multipurpose field, located in the business park area. When the business park was established, there were some areas that were designated for recreational use by the community. So far, it has only been used for a community garden, which Brumaghim noted will be relocated and will use raised beds to make it more manageable.

“The field will be located behind where the garden used to be,” said Brumaghim. Its primary use will be for soccer with the Terryville Youth Soccer Club. We will also use it for flag football and we are looking into lacrosse programs.”

Brumaghim thanked the Terryville Lions Club for making a donation to this field. Additionally, Nate Brown of the International Union of Operating Engineers Local 478 has been “very involved.”

“They have donated work and are out there clearing the land and putting in drainage,” she said. “They are doing a ton of work and using it as a training project.”

For the other project, Brumaghim said that she would also like to replace the outdoor basketball courts at Veterans Memorial Playground, which she said is expected to be completed within the next fiscal year.

“It’s about 30 years old and the way that it was constructed it was not meant to last that long,” she said. “The department had done some patch-ups and resurfacing but it is beyond the point where these temporary fixes will last long.”

Brumaghim added that she wants to look into repaving the tennis courts at Lake Winfield and possibly relocate them. As for the dog park, which was proposed at the most recent Town Council meeting for a parcel at 52 Canal St., Brumaghim said that she likes the idea of having a dog park but doesn’t think that location will be a good fit.

“I would like to see it in the business park area,” she said.

Moving forward, Brumaghim said that she wants to establish long-term goals for the Parks and Recreation Department, going five years out and 10 years out.

“I would like to have a well-defined vision going ahead to help us expand and improve our recreation program and our parks,” she said.