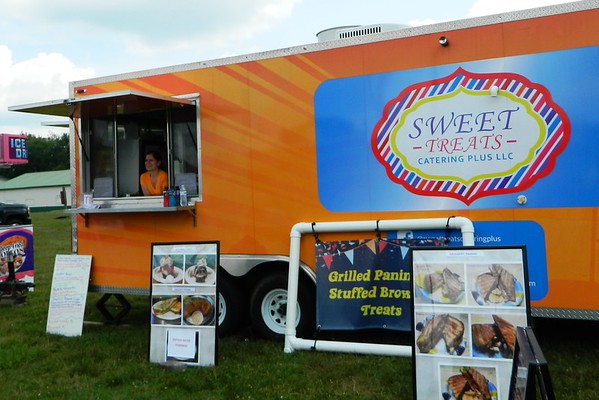 Erica Drzewiecki | Staff Spectators watch on as people compete in a hot dog-eating contest at the Litchfield Hills Food Truck Festival on the Terryville Fairgrounds Sunday. Buy this photo

Erica Drzewiecki | Staff A chicken pesto panini, one of many delights served up at the Litchfield Hills Food Truck Festival over the weekend. Buy this photo

It was the inaugural Litchfield Hills Food Truck Festival and a reason to taste the creations of those who make their living cooking on the road.

“I’ve always been a fair foodie,” Terryville resident Nick Apicella said Sunday, holding a round of fried dough the size of a truck wheel, painted with red sauce and speckled with grated cheese.

His friend, Chelsea Donovan from Southington, is on a strict diet. That didn’t keep her from talking to the owners of a taco truck to get exactly the order she could stomach.

“They were very accommodating,” Donovan said.

The pair hoped to hit up the Mac Attack truck across the fairgrounds later on.

Indulging their whims and simultaneously finding the appetite to sample multiple trucks’ fare was the challenge most visitors encountered.

Sunday featured 90-degree heat and sunshine all day. Thunderstorms and heavy downpours across the state kept some visitors away Saturday, though the storms never touched this corner of Plymouth.

“It rained everywhere around us, but it didn’t rain here,” festival chairperson Dawn Merli said.

Fried dough and hot dog eating contests entertained the bravest food lovers. Half-a-dozen attempted to eat 15 dogs each as fast as they could Sunday, as family members and friends stood by, cameras posed. The winner took home a flat-screen television.

“Our food is made with love,” Savage said.

Right beside the truck was a fresh-squeezed lemonade stand, run by Emily Christiansen, of Plainville.

“I love this event; it’s great,” Christiansen said, handing a giant yellow cup to another thirsty visitor to the booth.

Tammy Lucente of Sweet Treats Catering Plus LLC peered out from her truck window across the aisle.

A trained pastry chef who studied at Johnson & Wales, Lucente offered a menu of dessert delights, from cookies and cream mousse to fruit-filled grilled sandwiches. There were also several savory sandwiches available.

“I have a full commercial kitchen so I can really do anything,” the Southington resident said.

Darkside Entertainment has other events planned later this year, including a Halloween fair and haunted house in Harwinton at the end of October. Food trucks are expected there, too.

“You can’t fight the weather but our festival has been a great success so far,” Merli pointed out. “This is our first year so we’re definitely looking for ways to improve.”