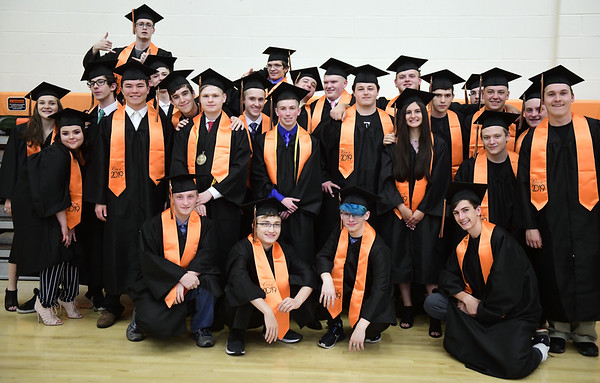 PLYMOUTH - ‚ÄúThis day marks quite possibly the most pivotal moment of our lives thus far,‚Äù Class Essayist Benjamin Beaudoin told his fellow graduates of the Terryville High School Class of 2019.

The 114 students received their diplomas Thursday night at the ceremony in the Borkowski Family Auditorium.

Principal Michael Hults recognized two graduates who are entering the military: Kayla Huginski, who will be part of the Army National Guard, and Cody Lozier, who has joined the U.S. Army.

Beaudoin said each day everyone is presented with dozens of choices, some inconsequential, others more weighty, and given the number of those decisions it‚Äôs inevitable people will make mistakes.

When you look back upon a particularly unwise choice with regret, guilt, or anger, try to bear in mind humans are imperfect and can make silly choices and mistakes, however that‚Äôs no excuse for our shortcomings, he said.

We must these occasional mistakes in stride, he said. ‚ÄúFor after all, isn‚Äôt the ability to get back up and keep going the most powerful measure of strength we humans possess?‚Äù

Beaudoin used the example of a mistake he made earlier this year of not preparing adequately for a test in government class and getting a poor grade.

‚ÄúI tried to convince myself it wasn‚Äôt my fault, the test was unfair, and other things like that, all to no avail. I finally was able to ‚Äòsnap out of it‚Äô only when I accepted that yes, it was my fault for doing so poorly.‚Äù

‚ÄúWe are not perfect, and we can do incredibly dumb things from time to time, but at the end of the day, that‚Äôs what makes us human, and isn‚Äôt that what truly matters?‚Äù Beaudoin concluded.

He outlined that the wheel was invented 5,500 years ago, 2,500 years ago paper was invented, etc. Then in the last 50 years, humanity has traveled to the moon, built the internet, and cured smallpox. In the last four years, the New Horizons probe rushed past Pluto at 10 miles per second, MIT created a solar cell so flexible and lightweight it can be draped on a bubble, researchers found evidence of life from 4.4 billion years ago, and a functional cure to HIV was discovered using CRISPR gene editing technology.

‚ÄúThings are moving fast, and there is no reason to believe that humanity is slowing down,‚Äù Morneault said.

‚ÄúThis is where we come in,‚Äù he said. ‚ÄúGraduation is a rite of passage, representing the growth and maturity that accompany the leap into adulthood; as such, we are now the ones responsible for moving things along once we leave this building and step out into the world.‚Äù

‚ÄúHowever, this does not mean we can take it easy; everything can and should be improved,‚Äù he continued.

‚ÄúWe have participated in every club and played every sport, truly leaving our mark on the history of Terryville High School,‚Äù he said. ‚ÄúWe have learned from the people that came before us and set an example for those who are yet to come. These achievements, although less interesting than the wheel, have set a precedent. As we continue to learn and improve, so too will our actions, and the positive influence we have on the world will only expand. The best is yet to come.‚Äù

‚ÄúTherefore, my advice to you, the Class of 2019, is to leave things better than you found them. This is the philosophy behind accelerating change, and it is one that we can all take to heart. Imagine the world you want to live in and create it; be the change you want to see,‚Äù Morneault said.

Class Valedictorian Diana Ieronimo stated: ‚ÄúAlthough today is the official day that we all go our separate ways, tomorrow is the day we will focus on the future. So celebrate the last 13 years, and everyone‚Äôs amazing individual accomplishments, but be sure to also take some time to think about your future as you transition into tomorrow.‚Äù

She highlighted some essential values to making the transition, such as being open to partnerships. ‚ÄúCollaboration exists in such a way that, in the path of learning about one another, it opens the opportunity to develop the best qualities of one‚Äôs self,‚Äù she said.

Ieronimo said the optimal means to pursue this is through service, whether traveling halfway across the world to Ethiopia to improve healthcare and education there, or simply volunteering your time in your community.

‚ÄúService is a key element of the unity of humanity,‚Äù she said. ‚ÄúAs everything completed alone is enhanced when done together, this foundation for the future of each other and society is key for the continuance of any progress.‚Äù

‚ÄúIt turns an activity into an adventure, a begrudging task into a pleasant memory, and a stranger into a friend. To be positive is to view your own life as an opportunity, but it is also to understand and attempt to bring happiness to others,‚Äù she said.

She noted that kindness supersedes by far any success or potential as an individual.

‚ÄúYou can be a doctor, CEO, mechanic, engineer, teacher, chef, parent, or even the president, but what you do is worth nothing unless you do it with kindness,‚Äù she said, noting ‚Äúthe decency and acceptance of others has the potential to unite us with a worthy, common goal.‚Äù

We have a responsibility to make the world a better place, she told her classmates. ‚ÄúWe are not, and will not be the silent generation, and we should never remain silent throughout life.‚Äù

Ieronimo concluded on a more personal note, telling her fellow graduates ‚ÄúI really do love you guys, and while it is a bittersweet day today, I have full confidence that this is not the last you will hear of the 2019 graduates of Terryville High School.‚Äù

But don‚Äôt let your success be defined by the size of your paycheck or your status, she reminded them. ‚ÄúReal, true success is determined more by your ability to reach your goals, and to do so with kindness and love. The impact this will have on the world will make it a better place to live. Because in the end, we‚Äôre all in this together.‚Äù