Tough schedule continues for Plainville as New Fairfield is next 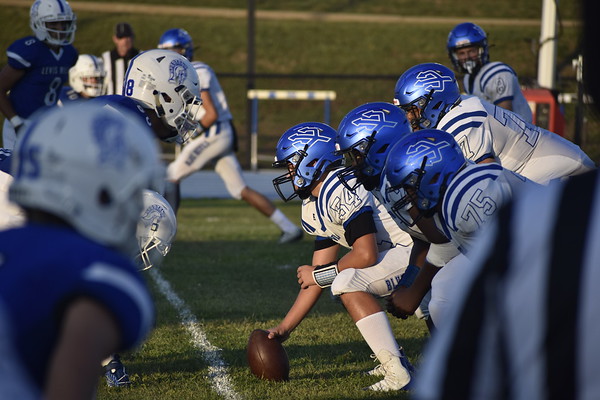 NEW FAIRFIELD – The Plainville Blue Devils are still trying to find their way with a new quarterback under center, and the road doesn’t get any easier after a Week 2 loss to Bloomfield. The Blue Devils lost 49-0 last Thursday, and they now remain on the road for the third straight week against the New Fairfield Rebels.

New Fairfield currently sits 2-0 on the season and tabulated the 26th most points in last week’s GameTimeCT Poll. The Rebels have outscored Sheehan and Pomperaug by an average margin of 37-17.5 to this point.

Plainville head coach Tim Shea mentioned the pedigree of a team like Bloomfield, but also noted that there are things to be taken from a game like that even with the deficit as wide as it was.

“There were some good things that we did,” said Shea. “As small as they were, it is something to build off of. After watching the film, it really came down to us being a step here or a step there from really being able to move the ball and doing some good things on offense. It’s all very correctable.”

One player who’s impressed Shea to this point is senior running back Kye McGraw. McGraw has been noticeably running harder and catching the ball well according to Shea. He also mentioned the positive steps he’s taken on the defensive side of the ball as a defensive back.

“It’s what we can expect out of a senior,” said Shea.

The Rebels will certainly keep Shea, McGraw and the rest of the Blue Devils’ hands full on Friday, however. New Fairfield quarterback Justin McCormack has passed for 458 yards through two games and is completing passes at a 78.4% rate. Junior running back Kyle Martin has also been an issue for opponents this season rushing for 276 yards entering Week 3.

“They believe in what they’re doing,” said Shea regarding the Rebels. “They’ve been very successful over the years. They’ve got a good program so we’re going to have our work cut out for us this week.”

Plainville will look to upset New Fairfield starting at 7 p.m. and stave off an 0-3 start to 2022.

New Fairfield is a team receiving votes as a top-15 team in the state by some, and Plainville has sputtered out of the gate against tough competition and trying to get their offense in sync. The Rebels should be able to take this one at home and if the win is convincing enough, they could garner a few more votes by the end of the weekend. It can be tough to tell given the stiff competition, but Shea is confident that his Blue Devils will continue to improve, especially at the quarterback position, with more reps each week. This is New Fairfield’s game to lose, but Plainville could keep them from rising higher in the polls with a few scores on Friday.