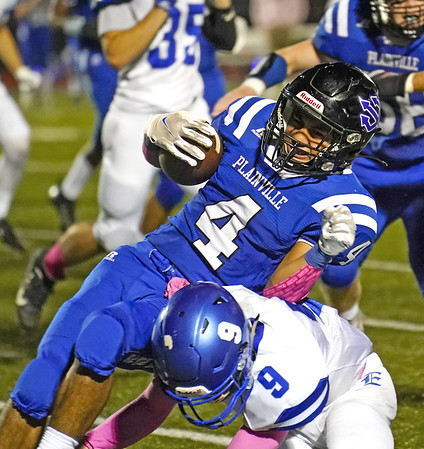 FARMINGTON – The Plainville football team needed to buckle down during the second half of its Thanksgiving Day game against Farmington.

Leading 20-7, the Blue Devils allowed a 70-yard touchdown run from Luke Watson with less than four minutes remaining in the third quarter. The score put the River Hawks within striking distance at 20-13 and gave the hosts momentum as they scored their second touchdown in a row, following its last-second TD in the first half.

With the Olde Canal Cup on the line, however, Plainville stepped up and tallied the game's final three touchdowns to close out its season on top.

“The third quarter is important,” Blue Devils coach Tim Shea said. “You don't want to give somebody else life back, they did and in football, 130-140 plays in a game, there's going to be ebbs and flows in the game. We buckled down when we had to and continued to make plays.”

Plainville's most important play also happened to be the longest score of the morning as quarterback M.J. Bakaysa found Joseph Kennedy for a 25-yard touchdown with 22 seconds left in the third quarter, putting the Blue Devils back up by two scores at 27-13.

A six-yard catch from Justin Emery and a 1-yard rush from Alexander Santini counted for 13 Plainville points in the fourth while Farmington couldn't manage any more scores, sending the Blue Devils past its rivals thanks to the impressive effort in the second half.

“We threw the ball pretty well today,” Shea said. “We protected, that was important. We’ve had our spells with the drops, still dropped the ball a little bit but it is what it is. It was a well-rounded effort. M.J. spread the ball around nice. We got to be able to run the ball better but all stuff to work on. This was a good offensive output for us today.”

Unfortunately for Plainville, its Turkey Day victory wasn't enough to secure a Class M playoff spot as Gilbert/Northwestern/Housatonic claimed the eighth seed with its win over Granby/Canton.

As the final team in, G/N/H will take on No. 1 Killingly in the quarterfinals on Tuesday. Plainville's absence from the bracket comes two years after advancing to the semifinals in Class S in 2019. Bloomfield beat the Blue Devils in that contest.