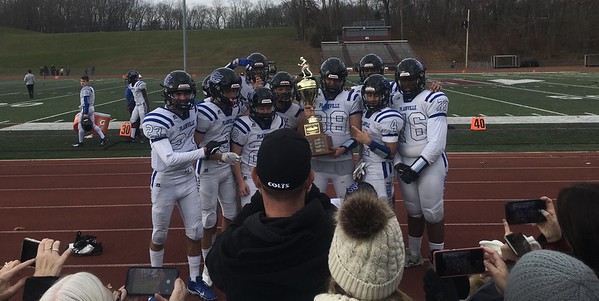 A group of Plainville football players pose with the Olde Canal Cup after its game against Farmington on Thanksgiving. | Ryan Ames Buy this photo
Published on Thursday, 25 November 2021 13:51
Written by Ryan Ames

Plainville football breezed past Farmington, 40-13, on the road to win its second straight Thanksgiving Day matchup.

Blue Devils quarterback M.J. Bakaysa threw five touchdown passes while Justin Emery led the receivers with a pair of scoring grabs in the big win over the River Hawks.

“It feels very good,” Plainville coach Tim Shea said. “Now that we’ve won at home and now we have an away win. My first year, we played up here and we were 0-10 and we got beat pretty bad. It was in the back of our minds but it’s football.

“We had a chance to come back today and we kept them focused all week,” Shea said. “We talked to the kids about what Thanksgiving means, this should be your only focus right now, this is what we can control, don’t worry about anything else. We started talking about legacy and do you want this to be your last game and what you have to do and they responded. Whatever happens now, happens now.”

Plainville is unofficially out of the Class M playoff picture despite the victory as Gilbert/Northwestern/Housatonic beat Granby/Canton 21-0 to jump into the eighth and final playoff spot. Brackets won’t be made official until Friday after committee approval.

Against Farmington, the Blue Devils scored in every quarter and also snagged two interceptions to round out their regular season in style. Plainville’s record finished at 7-3.

“We threw the ball pretty well today,” Shea said. “We protected, that was important. We’ve had our spells with the drops, still dropped the ball a little bit but it is what it is. It was a well-rounded effort. M.J. spread the ball around nice. We got to be able to run the ball better but all stuff to work on. This was a good offensive output for us today.”

A five-yard catch from Jahkai Veal in the second quarter and a 70 yard rush from Luke Watson in the third counted as the River Hawks’ two scores as they concluded the season 0-10.

Cameron Lamothe and Tye McGraw joined Emery as Blue Devils players to catch a TD while Alexander Santini ran in Plainville’s only touchdown on the ground with less than five minutes left in the game.

Should Thursday indeed be the Blue Devils’ final game of 2021, it can still look back on a successful season with impressive wins over South Windsor, Bristol Eastern and Farmington. Save for its loss to RHAM, two of Plainville’s three losses came at the hands of playoff-bound teams in Bloomfield and Bristol Central.