Plainville' Ky McGraw is tackled by Bristol Eastern's Brady Brown during the Blue Devils' 21-20 victory against the Lancers. | Dan Heary Buy this photo 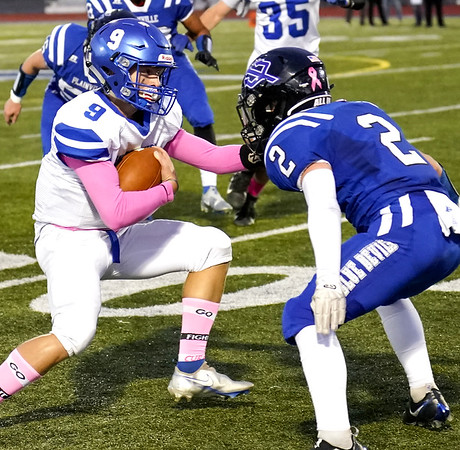 Brady Brown attempts to evade a Plainville defender during the Lancers' 21-20 loss to the Blue Devils on Oct. 1. | Dan Heary Buy this photo

PLAINVILLE - A pass that barely slipped past Austin Shorette for a two-point conversion with a minute left on the clock ended up being the difference between a win and a loss in the Bristol Eastern football team’s trip to Plainville on Friday night.

The Blue Devils scored two touchdowns in the final six minutes of play to squeak out a 21-20 win over the Lancers at Tinty Field. Eastern led 14-7 for much of the third quarter before Plainville tied the score and then took the lead with less than 90 seconds, handing the Lancers their second loss in a row after opening the season with a pair of wins.

Eastern took a shot at winning the game with the two-point try after senior wide receiver Nate Shorette made the score 21-20 by catching a tipped pass intended for Rayshon Andrews and dashed into the end zone for a 46-yard touchdown pass with 1:01 left on the clock. The score came on the first play of the Lancers’ drive and immediately answered the four-play, 46-yard the Blue Devils took the lead on with 82 seconds left to play.

“We were resilient,” Plainville head coach Tim Shea said. “We’ve been harping on [how] we have to start fast, it’s like we still aren’t there yet. We’re trying, but we’re still learning.”

Eastern had one more chance to win with 38 seconds remaining after forcing a three and out as Plainville tried to run out the clock. Unfortunately for the Lancers, they only traveled 29 of the 70 yards they needed to reach the goal line as the Blue Devils’ defense hung on to secure the win.

“The kids played really, really hard,” Eastern head coach Anthony Julius said. “We went down swinging, and that’s all you can ever ask for from the kids. There are some upset kids on our sideline right now, and we should be because we’ve lost two in a row here. But we were in the football game. We had an opportunity to win the game late and that’s all you can ask for.”

Tied 7-7 at halftime, neither team scored in the third quarter, but the Lancers started the fourth quarter with fourth and goal from the four-yard line. Senior running back Alex Marshall completed the drive by powering through the line to give his team a 14-7 lead.

The next four drives ended with punts before Plainville tied the score with less than four minutes remaining on a one-yard run from junior running back Ky McGraw. The Blue Devils then forced a three and out and a good punt return put them on the Eastern 46-yard-line.

Plainville took the lead four plays later with 1:22 left in the game with a five-yard shovel pass from junior quarterback Michael Bakaysa to senior tight end Cameron Lamothe. Bakaysa completed all four of his pass attempts on the drive, highlighted by a 21-yard connection with senior receiver Jacob Benvenuto.

“In the beginning we were playing very solid defense and we started to let up the deep ball,” Brady Brown, junior quarterback and defensive back, said. “They started running the ball more than we expected and that kind of surprised us. We started to work around that, but the deep ball was beating us and we just couldn’t come together.”

The Lancers got on the scoreboard first, taking advantage of an early mistake from the Blue Devils. The snap flew well over the head of Bakaysa on the first play of Plainville’s second drive in the first quarter and bounced 20 yards backwards into the end zone where Connor Gimpl recovered it for a Bristol Eastern touchdown.

“The defensive effort was really good,” Julius said. “We really kind of smothered them. They had a hard time operating. It’s the same story for us every single week, it’s a matter of we have to limit big plays and that’s any high school defense.”

The Blue Devils answered in the second quarter to tie the game with a 10-play, 67-yard drive capped off by a four-yard run from Bakaysa. Lamothe put his team in position for the score four plays earlier with a 42-yard catch and run that put Plainville four yards away from paydirt.

Eastern squandered an opportunity to enter halftime with a lead after a six-yard punt from the Blue Devils gave the Lancers a 37-yard field. Plainville took the ball back on the first play of Eastern’s drive when Marshall fumbled after breaking a 22-yard run, which allowed the score to remain tied with two quarters in the books.

The fumble was Marshall’s first of the season, he finished the day with 169 rushing yards, surpassing 100 yards on the ground for the fourth consecutive game. Bakaysa led the offensive attack for the Blue Devils, completing 17 of 26 passes for 196 yards and one touchdown.

Up next for the Lancers will be a home contest against the Capital Prep/Achievement first co-op while the Blue Devils will travel to Burlington to face Lewis Mills.