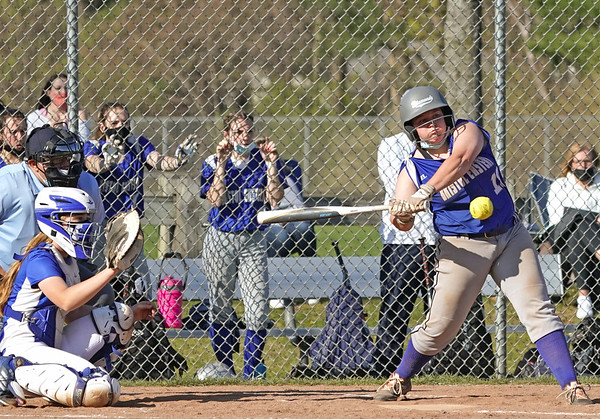 Riley Giblin, right, swings at a pitch during a softball game between Bristol Eastern and Southington. | Dan Heary Buy this photo
Published on Monday, 19 April 2021 21:52
Written by

WINDSOR – The Bristol Eastern softball team failed to score in its first six innings of play as it lost to Windsor 4-2 for its second loss of the season Monday.

Already trailing 4-0, Jasmine Perez knocked in the Lancers lone runs of the game with a double in the top of the seventh. Eastern only mustered four hits the contest while committing just as many errors, leading to starting pitcher Ali Tellier only giving up one earned run.

Eastern had a difficult time making contact against Windsor pitcher Taylor Falotico, who finished the game with 13 strikeouts to keep the Lancers’ offense quiet.

The Lancers have a week off until their next contest when they travel to face Lewis Mills on April 26.

Fletcher finished with nine strikeouts, including seven of the first 11 batters faced, and gave up two hits.

Bristol Eastern got two hits from Tyler Martin, and one hit from Ben D’Amato, who each recorded RBIs.

These two teams will meet again on Tuesday at Wethersfield at 3:45 p.m.

Along with Bade, D’Amore and Jackson Rusiecki tallied homeruns for Southington, while Jackson Cordozo and Jack McManus each had an extra-base hit.

The Blue Knights scored in every inning, racking up six in the final frame for the most on the day.

St. Paul 8, Oxford 4: St. Paul relied on some strong pitching and a couple of long balls to defeat Oxford 8-4 in Oxford this afternoon. The St Paul defense was a bit shaky committing 4 infield errors, but the pitchers came up big and limited the total damage to 1 unearned run. Brendan Foley picked up his first varsity win for St. Paul while starter Kevin Bourdeau took the loss for Oxford.

The St. Paul offense was powered by a pair of two-run home runs. Ryan Daniels hit one in the top of the first inning to give St. Paul the early lead and Mario Izzo had one in the top of the seventh to provide St. Paul with a couple of insurance runs. In the middle innings, RBI hits by Jamie Leggett, Jon Remillard and Devin Kulas generated St. Paul's other runs.

Oxford had RBI singles by Ethan Coleman and Justin Black accounting for their first and last runs. The two runs in the bottom of the fifth inning came about via a walk, a double by Matt Michaud, and a couple of St. Paul errors.

The Falcons will face Torrington on the road Wednesday.

Newington 7, Plainville 0: The Nor’easters made quick work of the Blue Devils on Monday, winning all seven matches in their meeting. Newington never dropped more than three games in a set, which only happened in the first singles match where Emilia Dugas beat Kimmy Xiques 6-3, 6-2. Newington dominated even more from then on as it won its next three matches by shutout.

Plainville is yet to win a match this season, losing each of its first two contest 7-0. The Blue Devils will look for their first win Tuesday in a road matchup with Enfield while Newington will face Berlin on the road Wednesday.

Bristol Central 187, New Britain 228: The Rams picked up their first win of the season with an assertive win over the Hurricanes at Pequabuck Golf Club. Sophomore Scott Petrosky posted a 40 to lead Central to the team victory and was backed up by a 46 from Rich Aubin, a 49 from Carson Rivoira and 52 for Tyler Wilson.

Central will return to Pequabuck to host Plainville on Tuesday while New Britain will hit the links at Hunter Golf Club in a road contest with Platt.

Southington 3, Simsbury 0: The Blue Knights won their second straight game by sweep with a dominant performance over Simsbury. Southington showed its defensive prowess in this match with 13 digs each from Matthew Morgan and Anthony Cannatelli while playing efficient offense that gather points in bunches.

Southington will stay at home for its next match when it faces Farmington on Thursday.