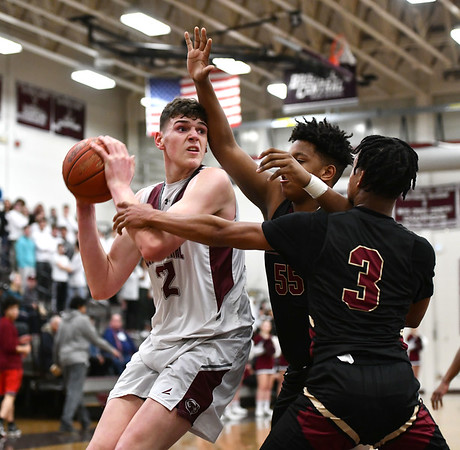 The Connecticut Interscholastic Athletic Conference is scheduled to have its Board Of Control meeting on Tuesday morning to discuss the plan for the winter sports season, and that plan will reportedly include pushing a number of sports back to 2021.

The CIAC’s new plan, which is expected to be officially announced on Tuesday at a 2 p.m. press conference, includes pushing all high-risk sports - such as wrestling, competitive cheer and competitive dance - back to after Jan. 1. Indoor track and gymnastics would also be pushed back to after the New Year.

GameTimeCT was the first to report on the proposal, which also lists gymnastics and indoor track among those being pushed to 2021.

According to the proposal, the CIAC will wait until the week of Jan. 4 to “consult with CSMS Sports Medicine Committee, the DPH, and Governor Lamont’s office to evaluate the status of high-risk sports in Connecticut and determine whether those sports may be played in late January or early February.”

If the current restrictions on high-risk sports are still in place after the New Year, then the CIAC will move those high-risk sports to the second semester alternative season, a shortened spring experience for sports that didn’t get a chance to play in their normal seasons, including football.

Two sports that are still set to begin in 2020 are basketball and ice hockey, both of which are considered to be moderate risk sports.

Practices for those seasons would begin on Dec. 5, per the new proposal, and would include mitigating strategies such as face coverings over the nose and mouth during play. Competitions for the basketball season would be allowed to begin on Dec. 17, and ice hockey on Jan. 11.

Mask breaks will be implemented in both sports, with one minute breaks being taken at the first stoppage of play or after the four-minute mark of each quarter in basketball, and at the first stoppage at or after the four-, eight-, and 12-minute mark of each period in hockey. Game officials will be encouraged to stop play at any point due to mask concerns, such as a mask slipping off of a player’s face.

Boys swimming is also cleared to begin practice on Dec. 5 and competitions would begin on Dec. 17. Non-conference meets would be done virtually.

The CIAC also recommended in its proposal that school districts in areas under “red” code, or having 15 or more covid-19 cases per 100,000 populations per day, should suspend competition and limit itself to conditioning and non-contact skill practices. If the school decides to play, it would have to be approved by the scheduled opponent.

The basketball and hockey seasons would allow the 16 and 14 regular season games, respectively, as in its previous proposal. The last date for state tournament games for basketball would be Feb. 28, and hockey March 7, which would run into the second semester alternative season, scheduled to be played in March and April.

The fall season just concluded this week, though some conferences, including the NVL, canceled its postseason experience due to rising covid cases, while some CCC schools had to back out of their playoff games due to quarantine precautions.