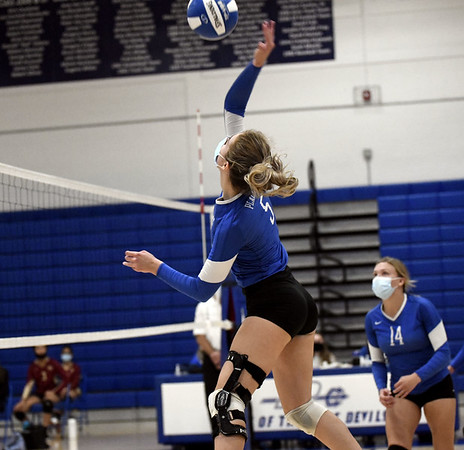 PLAINVILLE - When Plainville girls volleyball head coach Allie Caponigro began her first year as head coach earlier this month, she was still trying to remember the names of the players she was calling out instructions to on the floor.

Caponigro, who replaced Bob Moffo after three seasons as head coach, began her tenure the day before Plainville’s first game, leaving her little time to get acclimated with a team in need of a rebuild.

“I barely knew the girls’ names before the first game,” Caponigro said. “So we’ve come miles since then, and for me, I hope that we’ll keep with that momentum through the end of the season.”

The Blue Devils found some tangible evidence of that momentum on Monday night, even in a loss to New Britain at home. Facing another sweep after falling behind 2-0 to the Hurricanes, Plainville came from behind in the third set to win its first set of the season. The Blue Devils are still looking for their first overall victory of the 2020, but given how quickly the program’s transition began just before an already unique season started, the little steps forward are taken as big victories.

“This shows how hard they’re working in the gym and with their conditioning and their focus on the fundamentals,” Caponigro said. “Those lucky balls and the in-game play will come as they’re out there more. They’re working really hard. I have to commend them.”

It’s been a tough road for the program since a memorable 20-win season in 2016, combining for just six wins since, including a winless 2017 campaign. This year, Plainville has a young team and a first-year head coach, meaning the immediate goals for the Blue Devils are to simply get to know one another.

“We had a little bit of a struggle in that we just didn’t know each other,” Caponigro said. “It’s tough to come on as a junior and not know your coach. So moving forward, it just gets better and better each game with being able to share that trust and that bond, and to be able to work through the little upsets and not freak out so much.”

Another added challenge for Caponigro is the lack of senior experience, as no seniors took the floor for game action in Monday night’s match, and only two are on the roster. Caponigro has had to lean on talented juniors like Wiktoria Galazyn and Samantha Thompson, but as a whole, the Blue Devils are loaded with inexperience, including some of the upperclassmen.

“Plainville doesn’t have any build-up programs,” Caponigro said. “We have a rec program, but we don’t have a middle school program or any of that. A lot of girls don’t see their first set of volleyball until they walk into the gym their freshman year.”

While Caponigro had to take the reins of the program on the fly, she doesn’t arrive without experience. She was part of Steve Compson’s coaching staff when he was at the helm of the Blue Devils, giving Caponigro a familiarity of winning at Plainville. But now, in her new role, progress will be made one small step at a time. First, and most importantly, will be developing trust with her players and instilling the belief the program is headed in the right direction. On Monday night, that evidence was the team’s first set win of the season.

“It’s hard to come back to a new coach who is young and who they don’t know,” Caponigro said. “They’ve never heard of me. It’s tough in the first couple of games for us to get that rhythm as a team and to build that trust with each other. But I think we’re getting to that point where they trust what I’m telling them is good information. I think that will help us going forward.”