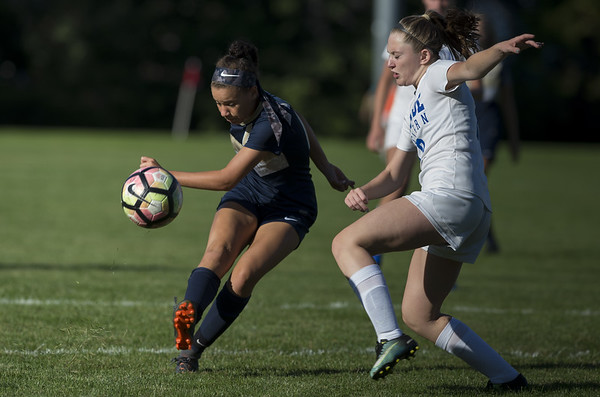 After all of the uncertainty surrounding the fall sports season, the girls soccer 2020 campaign will kick off in less than a week. The structure of postseason play is still unclear, but whatever is decided, there will be a number of local teams looking to stake their claim as the best in the region.

Here is a rundown of what to expect from each area squad as this unique, shortened season gets set to begin on Thursday:

Outlook: Roberto Pugliares’ first season as head coach brought the program’s third straight two-win season, but two of those wins came in the team’s last seven games, so things did start to look up down the stretch for the Hurricanes. New Britain returns its lone all-conference selection in Adrianna Faienza, though the team lost a load of seniors after being loaded with upperclassmen in 2019.

Outlook: The biggest unknown for the Rams at this point is who will be in net, as Gabby DeFilippis and Maddy Corcoran will likely battle it out until the season starts to see who will be in net on opening night.

Whoever wins the battle, Central is looking to compete with the best in the region this season.

“We have a solid core group of girls returning and a group of very talented young players,” Godbout said. “We are excited to see what the veterans and the young girls can do together. With the loss of Liz Hintz in goal, there will be a battle to see who will get the starting position. Both girls look good in the preseason. Overall, I think we are in a good position to have a great season.”

Outlook: The Lancers suffered a big loss with Leah Policarpio graduating and moving on to play Division II, but there are still plenty of capable players returning to fill that void. Emily Nelson dazzled in her freshman campaign, matching Policarpio with 10 goals on the season, including three game-winners, and will help Eastern along with all-conference selections Ciara Collins and Kate Kozikowski, the latter being the expected anchor for the Lancers’ defense in 2020.

Outlook: After a dominant regular season last year, Newington returns a load of talent that includes one of the best players in the state in All-New England forward Olivia Mullings, who will move on to play at the University of Hartford after this season. Zocco, Stolfi, Karanian, Armour and Chojnicki all represent returning all-conference talents to Newington’s roster, though the loss of all-conference forward Reagan Pelton will have to be dealt with. But Newington certainly has the personnel to do that, and put together another dominant season.

Outlook: Last year’s group never trailed in a game until the state final, and returned a load of talent that figures to be among the best in the state yet again. All-State midfielder Abigail Sowa, as is All-State forward Allison Carr. The defense will need a boost after losing Katherine Crouse, who went on to commit to CCSU, but having Emily Eigo back in net for her senior year should help that cause.

Outlook: This group returns Ashley Wenzel, Kylie Gentile, Kylie Jefferson all from season-ending injuries, and after winning a state tournament game before a self-reported infraction resulted in a disqualification last year despite all those injuries, the Redcoats could be among the best teams in the state in 2020.

"In all my years, this is the most talented group of players I have ever been around,” Joslyn said. “It is a shame we will not have a normal season as I am beyond confident this would have been a state contender. A lot of teams that are usually on our schedule are fortunate they do not have to play us this year. This group is motivated due to last season's circumstances. I look forward to whatever season we have to send this group off on a high note."

Part of that group is Wenzel, a former All-State selection who will look to highlight a Berlin group loaded with talent.

Outlook: Head coach Jim Husbands retired after leading the Falcons to the second round of the state tournament last season, and Pierea will take over with a load of returning talent, including goalkeeper Nina Zolwinski, a two-time All-State goalkeeper who should help keep St. Paul in just about every game this season.

Davis will be one of the top returnees to keep an eye on, as she led the team in goals with 14 last season in just her sophomore campaign.

Outlook: Like many teams this year, the Kangaroos’ main goal is to get in a full season for their team, especially the seniors, but beyond that, with eight returning starters, Terryville is looking to improve upon last year’s mark.

“Developing quality after our starting 11 is our biggest challenge, as we'll have to rely on several players in their first year of varsity soccer,” Rosano said. “I've been impressed by the effort and coachability of our younger players, and I expect them to continue to improve throughout the season, especially with the positive influence of our seven seniors.”

Outlook: The Blue Devils took a step back last season, winning just two games after reaching the state tournament in 2018. But the team was considerably young, carrying just two seniors while having 12 underclassmen listed on the roster. One of the few upperclassmen was Beausoleil, an all-conference selection who will be one of the team’s leaders in 2020.

Outlook: The Ravens went from the state tournament to just one win last year, but after losing five senior starters last season and 16 over the past two offseasons, a step back wasn’t unexpected. But with both Rivas and Bidoae back for 2020, both of whom were among the top contributors last season, this could be the start of Innovation’s climb back toward the top in the CRAL.

Outlook: A winning record is impressive under almost any circumstance, but doing 9-7 in the first season as a competitive program made 2019 a season to remember for the Gladiators. Now, the challenge will be sustaining that success, but with a big group of returning contributors, Goodwin Tech should be able to put together another solid season and continue to establish its new program.