'We want to be the best side in the region': Plainville boys soccer is set to face a number of new opponents this season and is eager to get started 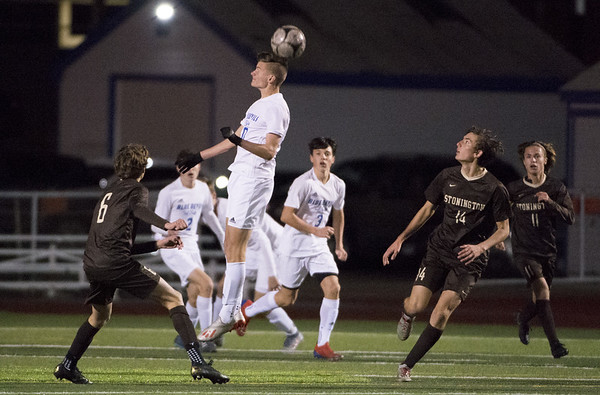 PLAINVILLE - When the fall sports season begins on Oct. 1, the Plainville boys soccer team will travel to Lewis Mills to help bring back high school sports in Connecticut for the first time since March 9, when the final winter state tournament games were played before sports were shut down due to the covid-19 outbreak.

“It's been our target to get to this point for a long time,” Blue Devils head coach Tim Brown said. “The kids have been great. They're not fragile and they understand the things they need to do, but it's nice to get back out there and start playing the game we want to play.”

Brown’s Blue Devils have been waiting for a chance to get back on the pitch as a full team, and Monday marked that occasion with the first day of full team practices. Plainville, like many other teams in the area and the state, come into the season with an added sense of excitement given how long it’s taken to get to this point, but the team is also trying to keep its focus on preparing for the season itself instead of what the season represents.

“We haven't really thought about that,” Brown said of the Blue Devils representing the return of high school sports in Connecticut. “I think the kids are generally excited anyway and anxious to get into game situations. I don't think that psychological side has even resonated with them, myself included. I'm just looking at it from a viewpoint of that I can't wait to get going, and are we going to get going? But it is something to consider that we're one of the fortunate ones to kickstart everything back up.”

Once everything starts up, Plainville will have a lot of new opponents to get used to, as a result of restructured schedules regionalizing competition. The Blue Devils will play nearly all of their opponents twice this season, so by the time the regular season ends, some of those new foes may not be so unfamiliar.

“We have a few new teams to play like New Britain, Southington and Avon, those are sides we're not used to playing,” Brown said. “So that will be an interesting component, and then we have our usual difficult sides like [Bristol Eastern and Bristol Central] and Lewis Mills. It gives us a good, solid schedule. I hope they formulate some sort of postseason format for us. We're a side that looks forward to the postseason, so I hope there's a way for that to occur.”

This season will be unique in a number of ways given the mitigation strategies that the Connecticut Interscholastic Athletic Conference has put in place to prevent the potential spread of covid-19, but for the Blue Devils, the schedule may be the most notable difference. Plainville has prided itself in recent years on stacking its schedule with elite competition, often leading to a regular-season record hovering around the .500 mark before getting into the state tournament and kicking off a deep run. It resulted in a state championship back in 2018 and a run to the state semifinals last year. Those normal opponents won’t be there, but Brown believes the teams that have replaced the others will offer a suitable tune-up for whatever postseason format the CIAC comes up with for this season.

“The schedules are out of my control,” Brown said. “My input is to just schedule the most difficult sides we can. We just want to play good, strong teams that prepare us. Fortunately, our league is strong. Some of the unknowns are really solid programs. I hate to lose a Glastonbury, but Avon, New Britain; those are programs that can offer a lot of difficulty for us. It's a great wrinkle to have. Anything to challenge the kids. It's all regional now and we want to be the best side in the region.”

Plenty of factors will make this season different than its predecessors, but Brown doesn’t want any excuses for the Blue Devils. Sure, their first team practice comes just 10 days before the season is set to begin, but he expects another winning season that ends with Plainville being considered one of the best teams in the state.

“I think the expectation from my viewpoint is still the same,” Brown said. “Every team has to go through the same restrictions makes it a level playing field, so everyone should have expectations to win. I expect to win games and beat the teams we're supposed to. The fact that we've done a lot of conditioning should mean we're fitter than normal. The skill work has been somewhat individualized, but we'll cram everything else into the next week and we won't skip a beat.”