Plenty of excitement for Plainville football to be back in postseason 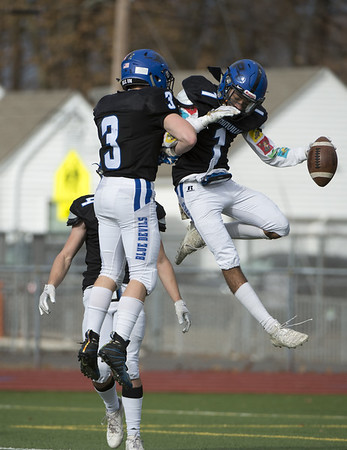 PLAINVILLE - Beating Farmington on Thanksgiving for the first time since 2014 gave the Plainville football team and its fans plenty to celebrate last Thursday.

Not only were the Blue Devils able to hoist the Olde Canal Cup for the first time in five seasons, the win also earned them their first trip to the state tournament since 2010. This return to the postseason marks the culmination the program’s rebuild that began with a 0-10 season in 2016 and the excitement for this team reaches far beyond the players and coaches.

The Backers Club’s goal is to “support all athletics through scholarships, equipment and fundraising.”

“Everyone couldn’t be more pumped up,” he added. “It’s a testament to Chris Farrell, the athletic director, and [coach] Tim Shea. This is his fourth year and it’s amazing what he’s done to this football program.”

Plainville’s athletic success has rarely included football as the most recent state tournament berth prior to the appearance in 2010 came in 1997 when the Blue Devils finished third in Class M with a 9-1 record and fell to No. 2-seeded Platt 18-11 in the semifinal. The town energy shifts when the football team has success.

“There seems to be a pretty decent buzz for those people who are paying attention and those people who are on the periphery so to speak,” Town Manager Robert Lee said. “I think there is an excitement in town, it wasn’t too long ago that our football team wasn’t doing very well at all so it’s nice to have those accomplishments.”

Plainville, the No. 7 seed after an 8-2 regular season, will face second-seeded Bullard Havens Tech (10-0) in the Class S quarterfinal Wednesday. The Tigers won all of their games by at least 11 points and held their opponents to less than 10 points in five games including three shutouts.

And as this group of Blue Devils prepare for the postseason, the town remembers the unlikely run made by the boys’ soccer team in 2018. The team entered the tournament as the No. 23 seed and won five games in the Class M state tournament, including victories over the top three seeds, for the program’s first championship.

“It would mean the world,” Gediman said. “It would put Plainville on the map, as far as sports-wise. The boys soccer team started it last year, along with the cheerleading team, with state championships. A win in the playoffs would be huge. It would continue the progression of Plainville sports.”

The next step in the progression is developing consistency. Now playing in its third state tournament of the past 22 years, Plainville will look and hope to develop a culture that leads to the Blue Devils being a consistent presence in Connecticut December football.

“I think it absolutely creates high expectations, but I think we’ll rise to the challenge,” Gediman said. “I don’t think coach Shea would expect any less or accept any less.”