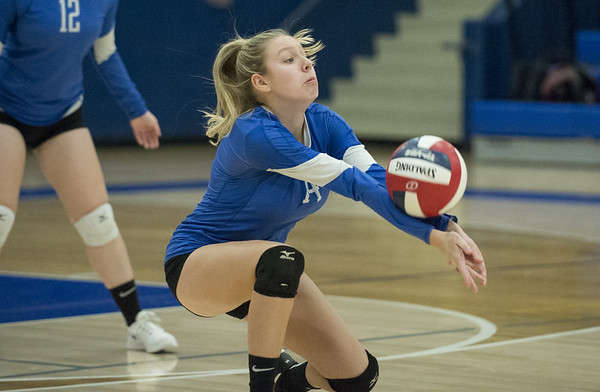 PLAINVILLE - For a rebuilding team, mounting losses can become a frustration, a distraction from the bigger picture.

The Plainville girls volleyball team, sitting at 2-13 on the season, has dealt with its share of defeats, but has refused to let losses turn to frustrations.

The goal for the 2019 Blue Devils isn’t about the final record. It’s about the demeanor of the team after each match, regardless of what the final score says.

So when Plainville shook hands with Berlin after a 3-1 loss on Monday, the focus wasn’t on the outcome. It was on where the team improved, which wasn’t hard to find.

A 25-22 win in the first set coupled with a comeback effort that fell just short in a 25-23 loss in the fourth set showed the makings of a team that fought through the final volley against an opponent with a state tournament berth in its future.

“They’re learning from their little mistakes,” head coach Bob Moffo said. “They learn something new every game. To me, that’s a win.”

Moffo and the Blue Devils have another couple weeks to eclipse last year’s mark, but that doesn’t matter to Moffo. He knows the state of his program, and while a rebuild suggests sights on the future, he chooses to keep his eyes on his current team, making sure they’re building the culture he wants to see on future teams that hopefully continue to climb the win column.

“I try to keep it positive every day, in practice and in games,” Moffo said. “That record doesn’t represent our team. We play some tough games and have others that we’ve kind of let slip away. I see an improvement from each year that I’ve been here. Even the kids come up and say they played well and were right there. That’s what I want to hear. I can’t say enough positive things about these kids.”

Moffo’s upperclassmen, who have endured every year of the current rebuild, have tried to spread the same positivity that their coach preaches on a daily basis.

“I tell them to just have fun,” senior captain Katherin Tanguay said about her message to the underclassmen. “We’re not going to be paying this sport forever, so just try your best and play.”

Of course, there are certain things the team and the program as a whole cannot control.

The absence of a freshman team makes it more difficult to develop those underclassmen, rather instead being forced to throw them right into the fire of higher-level competition.

It’s not the most ideal situation, especially for a program hoping to continue an all-out rebuild, but it’s what Plainville has and Moffo knows he has to make the most of it.

“We don’t have a feeder program, and we lost our freshman program,” Moffo said. “We’re hoping the kids we bring in, we get them into camps and summer programs and go from there. I have a nice nucleus of juniors and sophomores, and I’m hoping that can help us get moving in the right direction.”

Until that long-term plan starts to show in wins and losses, the Blue Devils are fixed on enjoying the moment in front of them. It’s not an easy ask for a team that hopes for better days ahead, but they’re improving every game, and for now, that’s enough.

“It definitely is hard, but you have to take the wins and losses to make the wins even better,” Tanguay said. “We’ve had rebuilding years for a long time, but we’ve gotten so much better this year.”