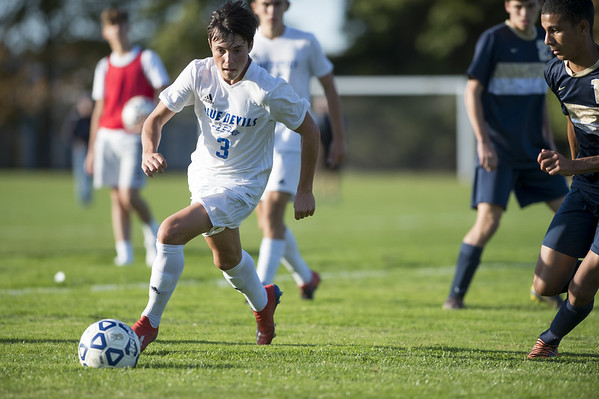 NEWINGTON - The Plainville boys soccer team is hoping that its recent play is teasing a dose of déjà vu.

Last year, after wading through a .500 season through the first two months of play, the Blue Devils won their last seven games of the regular season, earned the No. 23 seed in the Class M state tournament, and rode their wave of momentum all the way to an improbable state title, which went through the top three seeds in the tournament.

It took everything coming together at the right time to make that magical run a reality, and now, as Plainville has won two of three to pull to 4-5-1 on the year, is hoping for an encore performance.

“We’ve had some good results,” head coach Tim Brown said of his team’s recent stretch. “The signs that we’re starting to play the way we need to are there. We’ve been sorting things out with this team all along, and it’s taken a little longer than I would have hoped, but it’s starting to come together. I wouldn’t say we’re championship ready by any stretch of the imagination, but I’m encouraged.”

After an 0-4 start to the year, Brown and the Blue Devils are starting to play more like a team able to defend its state title. A win over Newington on Tuesday and a narrow victory over Lewis Mills last week has the team hoping it can figure it all out at just the right point in the season, like it did in 2018 after a 6-6-2 start.

Plainville had a relatively new group heading into this season after losing its three all-conference captains and another key senior contributor in Dane Stephens. It’s taken time for the team to learn each other’s tendencies and play more fluid soccer on the field, but like their predecessor, the Blue Devils are figuring things out on the fly with the state tournament looming.

“I think we’re a nice combination of younger and older guys,” Brown said. “Any side takes a little while to evolve. Typically a team comes together defensively first, then your forwards start to click and score goals. We’re doing some nice things with the ball. We’re still prone to go slow through the middle on occasion, but we’re doing better with that. Once we consistently do that better, we’ll be tough to stop offensively.”

Scoring still has been somewhat of an issue for Plainville (averaging one goal over the past four games), but as Brown said, the defense has come along and is starting to play up to the caliber of last year’s squad. After taking the lead early in the second half on Tuesday, the Blue Devils allowed just one shot on net the rest of the way, and have now allowed more than one goal just once in their last five contests.

“Defensively, we’re very sharp,” Brown said. “That’s a foundation for any championship team. Other pieces have to start clicking, but I have no doubt these guys can do it.”

The team believes it as well. It wasn’t easy to start, but Plainville is slowly shaping into a team that can make another deep run in the state tournament. All it takes is good timing.

“We’re starting to find our stride now,” captain Logan Miller said. “Once we find what will get us over the top, it’ll be hard to stop us.”