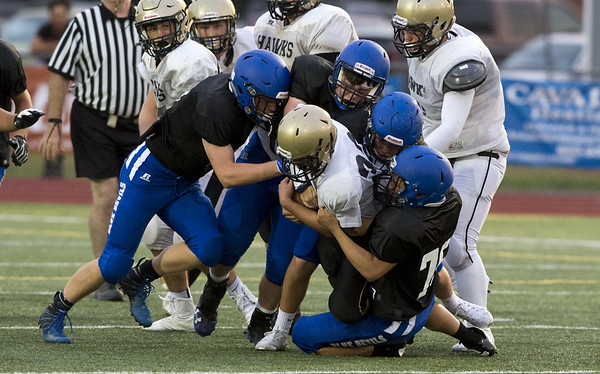 PLAINVILLE - A lot has changed since the last time Plainville took on East Catholic on the football field.

Last year, Plainville quarterback Frank Griffin ran for four touchdowns as the Blue Devils pulled away in the second half for a 49-15 victory on the road.

While Plainville improved to 4-3 in that contest last October, East Catholic fell to 3-4 as it lost its second straight - part of a five-game losing streak to end the season.

Both teams open the 2019 season tonight at Plainville High School looking to replace significant losses - including Griffin and Callahan for the Blue Devils, who played such a big role in last year’s game.

Returning is Collin, but in a new role as the team’s starting quarterback. Plainville also has many other experienced players returning, even if some are in new roles.

Plainville head coach Tim Shea said a key to the team’s early-season success will be how fast the older players on the team can jell and provide leadership.

Though still a junior, how Collin steps into his new role will also be a key factor.

“We’ll see how mature our quarterback gets,” Shea said.

But the year ended on a sour note as penalties, missed opportunities, mistakes on both sides of the ball and a key safety resulted in an 18-17 loss to Farmington in the annual Thanksgiving Day rivalry game, the Blue Devils’ fourth straight defeat to their neighbor to the north.

Shea said his team has been working hard to show it has learned from that loss ever since.

“Hopefully we’ve learned and we’re going to finish some games now,” he said. “We are a lot stronger. We are quite experienced.”

Just as Plainville did a few seasons back, East Catholic suffered through a winless campaign in 2017 before rebounding to win three of its first five games last year.

The Eagles will also be looking to put some new pieces together in the season opener and showing what they can do against the Blue Devils.