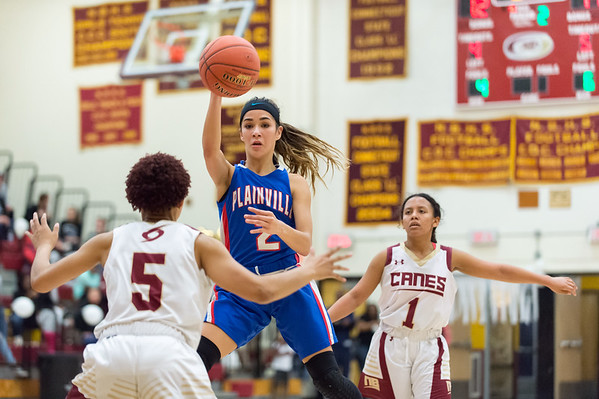 NEW BRITAIN - On a senior night where the New Britain girls basketball team delivered one of its most spirited efforts of the season, it was a Plainville underclassman who shined and helped the Blue Devils avoid an upset.

Sophomore Jaida Vasquez finished with a double-double, pouring in a game-high 20 points to go with her 11 rebounds for the Blue Devils, who held off multiple comeback efforts from the Hurricanes in a 64-60 victory, the team’s third in a row, Monday night.

“That’s why we tell our kids not to look at records,” Plainville head coach Jessica Neuweiler said of the fight the 4-13 Hurricanes put up on their home floor. “[New Britain] always comes to play.”

Down by as much as 10 in the second half, the Hurricanes used a 3-point shooting spurt and a monster night from Tianna Sweeney, who finished with 19 points, to pull within one point late in the third quarter. But Vasquez and the Blue Devils (11-7) made multiple defensive stands down the stretch to seal the win, while New Britain missed on clutch free throws that could have tied the game.

“The last two games have been like that,” Hurricanes head coach Marc Wesoly said. “We’ve been right there the past two games, but we just can’t get over that hump.”

Maya Slisz converted an old-fashioned 3-point play to pull New Britain within two with 30 seconds remaining, and the Hurricanes’ defense forced a turnover on the ensuing inbounds pass, leading to free throw opportunities for Jada Hubbard, but she missed both free throws to keep Plainville ahead.

New Britain’s defense kept prolific Plainville scorer Caitlin Barker scoreless through the first quarter, but the senior still managed to finish with 16 points in the winning effort. Samantha Lozefski added 11 for the Blue Devils, including a pair of clutch 3-pointers when New Britain was threatening to pull ahead in the fourth.

The teams traded 3-pointers early in the fourth quarter, as Lozefski hit two 3s in between triples from New Britain’s Asia Gaines and Slisz to keep Plainville’s lead at six.

“We tried to pack the inside because we were outsized,” Neuweiler said. “They caught us not rotating well and they hit some big 3s. They legitimately hit great shots.”

After a strong defensive stand by the Hurricanes, Plainville sent an inbounds pass out to the top of the key where Barker drained a 3 from two steps beyond the arc to push the lead back to nine.

Gaines knocked down her third triple of the night with just over three minutes to go to pull the Hurricanes within two. With the deficit still at two in the final minute of the fourth, New Britain committed an intentional foul to give Plainville two extra free throws in addition to possession, which was enough to secure the hard-earned win.

“They put their heart on the court,” Hurricanes senior Brianna Clarke said after being honored as one of the team’s two seniors, along with Toni Mills. “We have three more games left, and we’re going to try our best to win those and end the season on a positive note.”