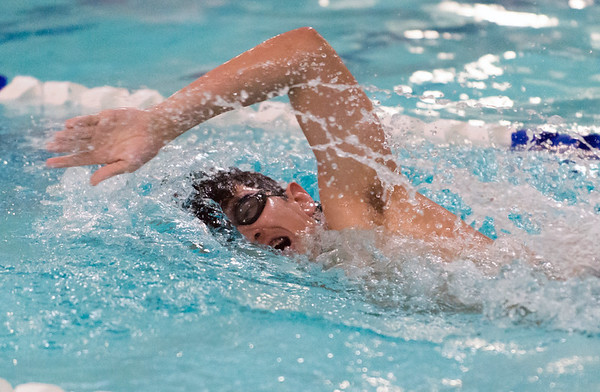 PLAINVILLE - After the most recent winter storm shut down practices last weekend, Plainville swimming head coach Chris Zagorski was worried about rust playing into the Blue Devils’ performance in the week that followed, especially with two meets on the schedule.

If Plainville’s swimmers felt any lagging effects of extended time off in Tuesday’s meet against Bulkeley, they would have faced almost no time to recover and shake off any lingering rust before Friday’s meet against Southington, which always comes with some of the top swimmers and divers in the area.

Call it adrenaline or an extra push against a top team in an electric atmosphere, but despite the losing effort, the Blue Devils showed little signs of fatigue or lethargy in front of their energetic home crowd. Southington won the meet 91-87, but still walked away impressed with an opponent fresh off a long break and another meet just three days earlier.

“That’s a good squad,” Southington head coach Evan Tuttle said of Plainville’s swimmers. “That’s why we like to get here and compete with them every year. It’s always a good meet, and our kids know they are going to have to perform well in order to get the win.”

Heading into the meet, Zagorski was especially concerned with how his Blue Devils would hold up in longer distance events that really put endurance to the test. Time away from practice and conditioning usually results in depleted endurance, but Plainville held its own.

In the 500-meter freestyle, the longest event of the meet, the Blue Devils recorded a second place finish thanks to sophomore Nathan Lyman, who finished with a time of 5:35.93.

Lyman was just the start of Plainville’s promising showing, as every other Blue Devils swimmer in the event recorded personal best times, including Colin Blake and Matt Lagassey.

“That was really good to see,” Zagorski said. “Recording a personal best in a distance event coming out of a break is not easy to do.”

Zagorski credits the lack of rust to the youthful energy that has rejuvenated the swimming program as a whole, as underclassmen like Lagassey, Blake, Lyman and Joe Michalic have continued an upward trend for the Blue Devils in recent years.

Zagorski sees it not only in the pool, but in the team’s support of their fellow swimmers. Regardless of the score or event, Plainville’s group was lined around the pool cheering for its teammates, showing no signs of a group stumbling out of an extended break.

“Their focus [Friday] was outstanding,” Zagorski said. “The kids were pushing each other. We have to see if we can keep that going in Meriden next week.”