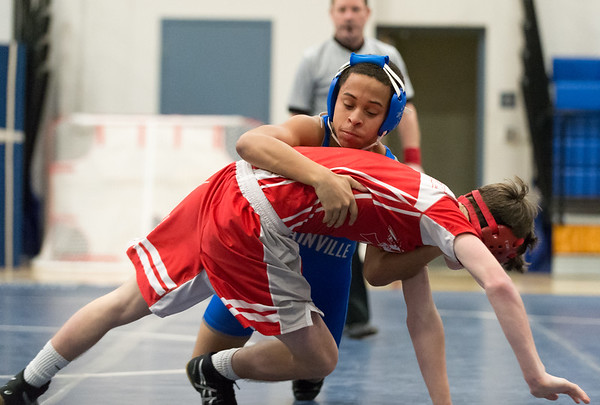 PLAINVILLE - Sometimes a little luck can take a team a long way.

The Plainville wrestling team won the opening coin toss prior to Wednesday night’s match against Berlin, allowing the Blue Devils to set their optimal lineup and use a fast start to take down the Redcoats 39-30.

It was Plainville’s first home match of the season, and the Blue Devils greeted their home fans by taking down Berlin for the first time since 2005, and for just the second time in head coach Rusty Spence’s 15-year tenure.

The favorable coin toss helped Plainville keep Berlin stud Dan Veleas on the bench until the final match of the night, allowing the Blue Devils to take control of the match before facing the three-time state champion.

“This is a big victory for us,” Spence said. “It was very important to get the choice. We knew they would try to throw out Veleas at 152 [pounds], and I wanted to get a good match. So they had to throw their actual 152 pounder out. It was a phenomenal effort.”

“Usually when we win the first few matches, it’s kind of a snowball effect and we just keep going,” Voisine said. “It makes us confident, but you never know for sure.”

Berlin’s Sebby Malespini got the Redcoats on the board with a dominant 17-7 win over Ty Pales, but Kaleb Korona swung momentum back in Plainville’s favor with a dramatic pin of Aidan O’Connor, securing the six points with just nine seconds left in the final period.

After two quick pins, one in favor of both teams, Berlin’s Noah Cintron secured a late takedown of Johnny Golzzardi to seal an 8-5 decision with just over a minute remaining in the final period to help the Redcoats draw closer at 27-13.

Dylan Bocci gave Plainville some breathing room with a pin of Shan Naeem, who held an early lead before a penalty changed the tide of the match. Jayden Barton put the contest out of reach with a third period takedown to claim a narrow 6-5 win and put the Blue Devils ahead 36-13.

Berlin took the last two matches, one by forfeit and one in convincing fashion by Veleas, but the Redcoats had dug themselves an early hole that proved too deep to climb out of.

“It’s tough, because we always want to get those points and get off to a solid start,” Veleas said after his win closed the match with a 17-2 tech fall over Dakota Dinielli. “But we’re young and still improving. As long as we see hard-fought matches for six minutes, that’s all we can ask for. That’s what’s going to lead to our best performances.”