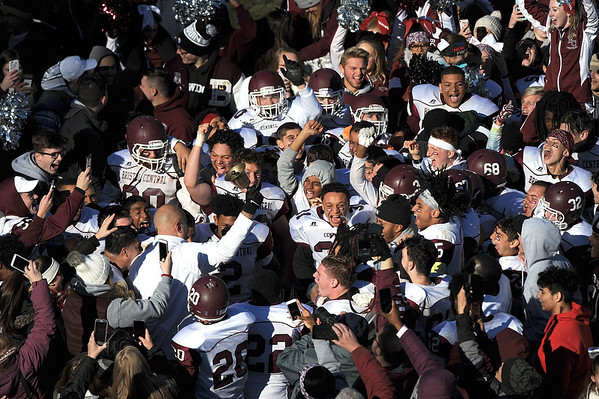 11/23/2017 Mike Orazzi | Staff Bristol Central after a win over town rival Bristol Eastern during the annual Battle For The Bell at Muzzy Field Thursday. Buy this photo
Published on Tuesday, 20 November 2018 12:21
Written by

Bristol Central and Bristol Eastern will play their annual Battle for the Bell game Friday afternoon at 2 p.m. at Muzzy Field, a day later than Thanksgiving.

Southington and Plainville both moved their football games up from Thanksgiving morning to Wednesday night at 6 p.m. Southington will host Cheshire in the Apple Valley Classic, while Plainville travels to Farmington in the annual Olde Canal Cup game.

St. Paul’s road game against Oxford has been moved up to 5 p.m., but remains on Wednesday night.