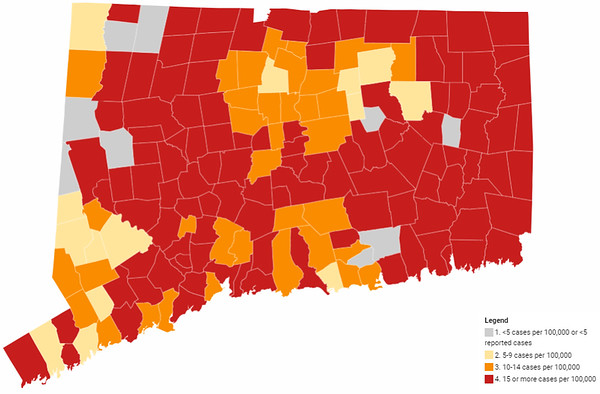 HARTFORD - Sixty-five percent of Connecticut's 169 cities and towns are now in the red alert level, the state's highest of four levels for COVID-19 infections, according to state data released Wednesday as families gather for the Thanksgiving holiday.

The 110 communities mark the largest number designated as being in the red zone since April 22, when there were 112, according to state records.

New Britain, Bristol, Plainville, Southington and Plymouth are all in the red zone. Newington and Berlin are both in the orange zone.

“That's just a reminder that we're not an island. That's why we've got to continue to be very cautious,” he said.

The seven-day rolling average of daily new cases in Connecticut has risen over the past two weeks from 341.71 new cases per day on Nov. 8 to 751.29 new cases per day on Nov. 22, according to researchers at Johns Hopkins. In order for a community to be designated as being in the red alert zone, it must report case rates over the previous two weeks of greater than 15 per 100,000 population.

As of Wednesday there were 300 COVID-related hospitalizations, the highest number since Sept. 20.