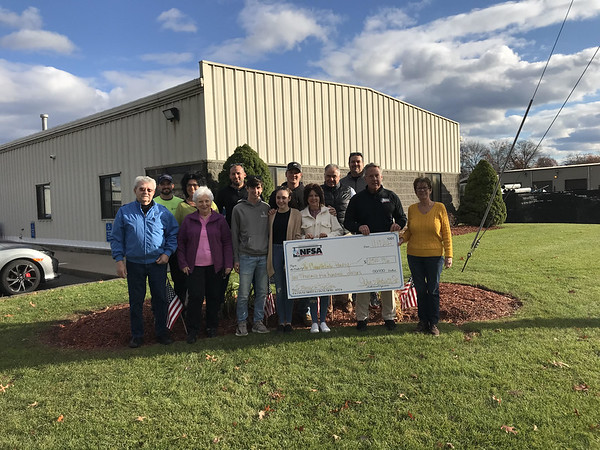 PLAINVILLE – The Plainville Community Food Pantry received a donation of $2,500 and 1,110 pounds of food from the Connecticut Chapter of the National Fire Sprinkler Association (NFSA) Friday in memory of the late Troy Orsini.

John Abbate Jr., president of the Connecticut Chapter of the National Fire Sprinkler Association, said this was the second year a donation was made in memory of Orsini. Orsini was a former co-worker of Abbate Jr., when both worked at W&M Fire Protection Services in Plantsville and also a NFSA member. He died of covid-19 last May.

“I came up with the idea thinking of what to do in memory of Troy,” Abbate Jr. said. “Troy worked there for many years and we became close friends. This year the collection was even better than last year. W&M is a subsidiary of APi Group and we had a couple hundred members from Connecticut, Massachusetts and New York donate.”

Susie Woerz, executive director of the Plainville Community Food Pantry, thanked all those who contributed to the donation.

“It was very moving,” she said. “We’re very thankful that they chose us.”

As with last year, several of Orsini’s relatives came to the Plainville Community Food Pantry for the check-passing. They also received a tour of the food pantry.

Michele Bonacassio, Troy Orsini’s sister, joined his widow, Karen Orsini, and his college-age daughter Samantha Orsini among others at the Food Pantry this Friday.

“We’re all going to cry,” Bonacassio said. “It’s incredible to see so many people cared about try and what he cared about. It’s amazing.”

Karen Orsini said the donation in her late husband’s memory is “what he would want.”

“He was all about helping other people,” she said.