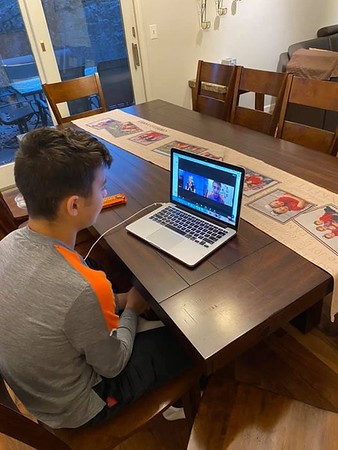 PLAINVILLE – Local 14-year-old Dominic Ciriello was contacted by The Hershey Company after amusing a neighbor by apologizing on camera for taking two king-sized Reese’s cups while out trick-or-treating this year. After being sent complimentary candy when the story went viral, he is choosing to donate some of the candy to Connecticut Children’s Medical Center.

When Ciriello stopped at the home of Kayla Lalles, he was seen on a doorbell camera apologizing for taking two Reese’s cups instead of one. The story has since “gone viral,” with a strong response on social media.

The footage amused Lalles enough that she posted on Plainville Talks trying to find out who the youth was. She received her answer from Ciriello’s mother, Nicole.

The posts received hundreds of responses from Plainville residents, several of whom said Ciriello had made them laugh or put a smile on their faces.

“Oh my goodness, he’s so funny,” wrote Nicole Pelletier. “Great reaction to King sized Reese's. That was always a score when trick or treating.”

Judy Jakobeit Nelson commented on one of Nicole Ciriello’s posts stating her son’s behavior “just goes to show” that she had raised a polite child.

“This really makes my heart happy,” she said. “I posted something on four town pages asking people to please be kind to teenagers as they go out trick or treating because they’re just holding onto being kids. This is just an affirmation that people don’t care what the age of the kids are as long as they’re happy having fun and being polite.”

The story was picked up by local news and radio stations.

Nicole Ciriello said she was shocked to see the response her son had received.

“He was just being his normal, big-personality self,” she said.

Nicole Cirello took to Twitter on Nov. 2 and tagged Reese’s in her post. The next day, she received a response from The Hershey Company.

“We couldn't help but smile when we saw the story from trick or treat night," the email read.

The Hershey Company representative told Cirello the company would be sending her family Reese’s new Super King Sized Reese’s and other products.

“It was great to see the Halloween celebration return to extra exciting levels in 2021,” the email read. “I hope you had just as much fun as Dominic on Halloween. Thanks again for sharing the story. We have Reese’s with your name on it.”

Dominic won’t be keeping all of the candy for himself, however. His younger sister, Daniela, 9, suffers from Cooley’s Anemia and, as a result, requires a blood transfusion every few weeks. Having grown up supporting blood drives for his sister, Dominic will be donating several boxes of candy to Connecticut Children’s Medical Center.

“He’s a good boy,” Nicole Cirello said. “He sees what his sister is going through and he is really interested in donating them.”