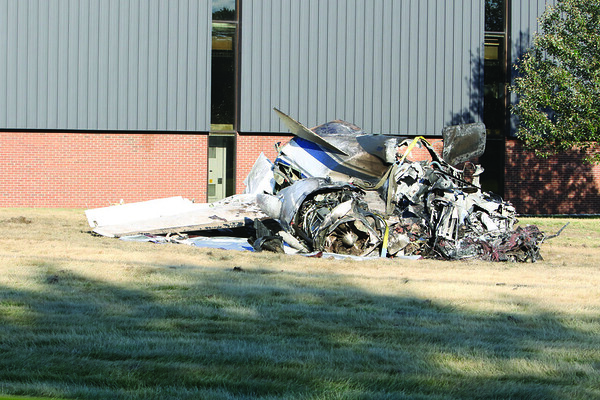 Mark Meglio photo Remains of the Cessna plane that crashed last week in Farmington, killing a Bristol pilot and three others. Buy this photo
Published on Sunday, 5 September 2021 21:42
Written by

FARMINGTON – Investigators continued to review evidence from a fatal plane crash in a Connecticut suburb that left four people dead earlier this week, and a preliminary report on the accident is expected to be released within the next two weeks.

The Cessna Citation 560X took off from Robertson Airport in Plainville, a few miles away, Thursday morning and crashed into a manufacturing company building. The flight was headed to North Carolina.

The preliminary report will contain factual information about the plane, pilots, weather conditions and other factors, but a final report detailing the cause of the accident could take a year or more to complete.

Maria Noel was working at her desk in a building adjacent to the one where the crash occurred, and said she heard a loud boom and saw her computer screen flicker. She and a co-worker ran to the window.

“We saw the flames shoot out. The flames and the smoke were so intense,” Noel told the Hartford Courant.

Farmington police said the pilots aboard the small jet were William O’Leary, 55, of Bristol, and Mark Morrow, 57, of Danbury. Thirty-three-year-old Courtney Haviland and her husband, 32-year-old William Shrauner, also died.

Haviland grew up in Farmington and was a fellow at Brown Pediatric Emergency Medicine in Providence, Rhode Island. Shrauner was a cardiology fellow at Boston Medical Center.

On Friday, officials tweeted in a video that they were assessing the damage and attempting to resume production.