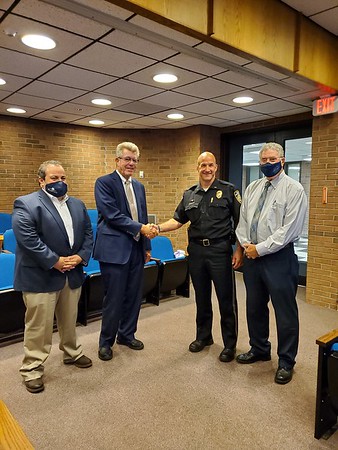 PLAINVILLE ā Lt. Eric Peterson has been appointed as the townās interim police chief for the next six months, after which time his position will be reassessed and he may or may not be promoted to the permanent police chief position.

Town Manager Robert Lee said that, after a lot of discussion and analysis of the qualified candidates, the Town Council had been unable to come to the required number of votes to appoint a permanent police chief. So, Peterson was appointed Thursday to an interim position as a compromise.

Peterson was appreciative of the promotion.

āItās a good feeling to get the position,ā he said. āI worked hard for quite a few years and itās all coming together. Iād like to let people know I had a good mentor in Police Chief Catania. I would not be in this position if not for him and all the people in the police department who work hard every day, day in and day out.ā

Following the death of Police Chief Matt Catania on March 10, the town had conducted a search for his successor. Peterson was among the three finalists to be considered for the position. He received the endorsement of the Plainville Police Union earlier this month.

āI think appointing Eric as interim chief is a good move,ā said Lee. āHe has been with our police department for more than 20 years and I think he has showed enthusiasm for the position. He certainly has a passion for serving Plainville. We have been without a police chief for close to a year and Eric Peterson and Lt. Nick Mullins have been leading the department together for these past months. Itās time that we had someone in charge. I expect Eric will do a good job.ā

Peterson, who has been with the department for 24 years, was appointed to the interim position by a 5-2 vote. Councilors Kathy Pugliese and Deb Tompkins were the dissenting council members.

Pugliese said that she wishes Peterson āevery successā as he moves forward in the interim chief position.

āItās a big job and heās confident that he can rise to the challenge,ā she said

Councilor Jesse Gnazzo said that Peterson ādemonstrated above and beyond anyone elseā a true passion and care for the town of Plainville and its residents.

āMore so than anything, we need someone who cares about Plainville leading our department,ā he said. āIn my opinion, hands down, he should be appointed as our permanent police chief. I hope that he will show the naysayers that he can do a great job.ā

Councilor Rosemary Morante said that she was āvery supportiveā of Peterson. Along with Mullins, she said, Peterson had been providing leadership of the local police department for months and that it had operated smoothly during that time.

āI am confident that he will do a great job in this interim position,ā she said.

Councilor David Underwood said he supported Peterson āpretty much from the beginning.ā He said he always believed the townās next police chief should be promoted from within.

āLooking at Lt. Petersonās background and qualifications, he was just as good as anybody from the outside,ā said Underwood. āI believe in promoting from within whenever possible. Eric is Plainville-grown and he has been with the police department for a number of years. Heās got the backing of the police department and I hope to make him our chief of police after six months if Iām re-elected.ā

Councilor Chris Wazorko said that appointing Peterson to the interim police chief position is a āpositive step for the town.ā

āWe spent the summer doing interviews and going through the candidates and five of us felt that this was the best way to proceed forward,ā he said. āIām looking forward to working with him, sitting down with him and talking about specific things that need to be addressed with the police department.ā

Wazorko said that he hopes to address where the town will allow smoking of marijuana now that it is legal for recreational use in Connecticut. He also hopes to proceed with getting body cameras for local police officers, which Catania had been working on as well.

āWithout an interim or permanent police chief, some of these items werenāt able to move forward,ā said Wazorko. āI believe that Eric Peterson is the right person to get us there.ā

āI will not be supporting the motion before us and I will not offer an alternative motion as I am confident I will not receive the required majority.

When our Chief Matt Catania became gravely ill, I spoke with Robert Lee suggesting we hire an external interim Chief of Police to help us through the coming time while Matt was ill and unable to perform his duties. It was my belief the Department should have one person in command to administer the countless issues which come before any police organization. A decision was made to divide the responsibilities for what time was hoped to be short in duration ā as we all know, this did not transpire.

I still hold this position of hiring an external temporary Chief as the Council continues to struggle to reach a consensus regarding the selection of the next police chief.

Regarding the many social media posts, emails and comments recently received and published, I offer this information. While all certainly have an opportunity to opine on this process, the Council is in possession of information not available to the public. We agreed to a process which included a screening of candidates by a police chief review board, which ranked candidates in order of competency for the position.

Additionally, the Council has extensive documents, background checks and resumes of each candidate.

Most importantly, personal interviews were conducted to assess and familiarize ourselves with each individual separately with candid, open questions.

Although any process can have its flaws, and this task certainly has its own issues, my goal is to choose the best possible candidate for a singularly visible and important position within the Town of Plainville.

The implementation of the police accountability act, creating procedures regarding the new marijuana bill along with a mandatory accreditation process are but some of the requirements all police department in the state must manage.

Police departments across the nation are struggling with a variety of issues, not the least of which is recruiting new candidates for officer. I will continue to express my concerns with my fellow Council members and will work with each of them to reach the best decision for the police department and the Town of Plainville.ā