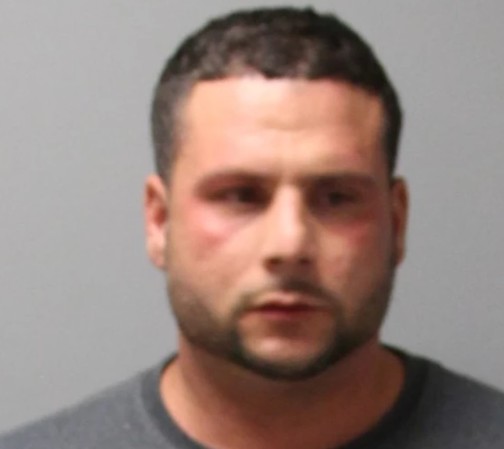 A Naugatuck man allegedly threw a state trooper from his truck and sped off following a car chase that started in Plainville and ended in a collision and spin out.

State police said they received numerous 911 calls around 10 p.m. Thursday, reporting that a motorist in a Ford F150 was driving erratically, swerving across all three lanes, and nearly struck multiple vehicles in Plainville, on Interstate 84, near Exit 34.

Several troopers responded to the area and activated their lights and sirens to pull over the operator, who was later identified as Daniel Rapuano, 36, of Naugatuck. State police said they attempted to box him in near Exit 40 in West Hartford, where he stopped briefly.

A trooper approached Rapuano’s truck, stood on the running board and attempted to open the door, according to state police. State police said Rapuano sped off and threw the trooper into the center lane, from the truck.

Troopers believed Rapuano would be encountering heavy traffic up ahead.

“Due to the totality of the circumstances intentional collision was authorized,” state police said in a statement.

The same trooper who had been thrown from Rapuano’s truck was able to get back into a cruiser and catch up to him, making contact with the rear, right quarter panel of the truck and causing it to spin out and into the median near Exit 43. State police added that Rapuano, who did not report any injuries, is a high risk offender who was being supervised on parole.

Rapuano was charged with second-degree assault with a motor vehicle, second-degree assault, assault on a police officer, first-degree reckless endangerment, failure to drive in proper lane, reckless driving and operating under the influence of alcohol or drugs. He is being held on $250,000 bond and there has been a remand to custody order stemming from his parole.

Rapuano was expected to be arraigned in Hartford Superior Court on Friday. According to judicial records, he was convicted of sale of hallucinogen/narcotic in 2016, when he was sentenced to four years in prison and four years of special parole.

The trooper who was thrown from the pickup truck reported minor injuries and was taken to Hartford Hospital.