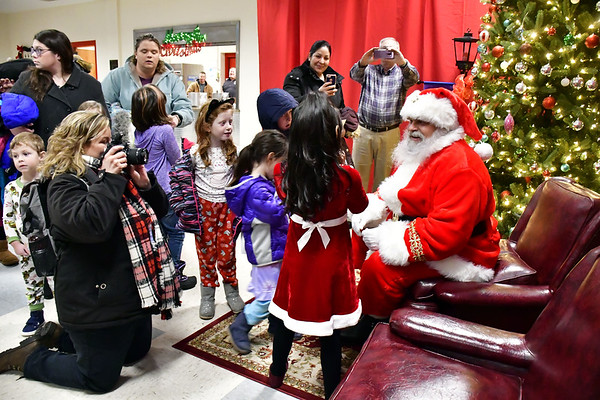 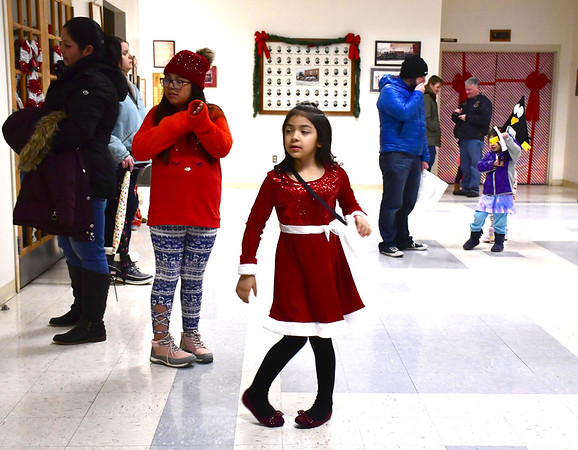 PLAINVILLE - Despite a rainy night, the community still came together inside the fire station to sing Christmas songs and spread cheer before lighting up the town’s tree. Neither was Santa Claus deterred from his annual visit.

Several dozen residents came out with their children who, dressed in mittens, jackets and sweaters, ran excitedly around the decorated fire station in anticipation of the visit from Santa. Christmas lights lined the ceiling and a large tree was set up, next to which were comfy seats for kids to sit with Santa Claus and share their holiday wishes.

Linda Coveney, second chairperson of the Plainville Chamber of Commerce, invited everyone to gather around in a circle and join in singing Christmas carols. Songbooks, made by the Kids in the Middle, were passed around and the crowd raised their voices for such favorites as “Deck the Halls”, “Hark! The Herald Angels Sing” and “We Wish You A Merry Christmas.”

Jeff DiCosimo, chair of the Plainville Chamber of Commerce, welcomed all who attended the 27th Annual Tree Lighting.

“Thanks for coming out on a cold and rainy night,” he said, telling them that, unfortunately, due to the weather, the horse-drawn carriage rides through town were cancelled. However, visitors would still be able to pick up a Christmas ornament for their tree at United Methodist Church.

Town Council Chair Kathy Pugliese offered greetings for the season on behalf of the Town Council and thanked all those who put the event together as well as the town crews who decorated the community in lights.

“I’m impressed that you all came out despite this not being the greatest weather,” she said. “But this is all about Santa Claus and he’ll be here soon.”

Town Manager Robert E. Lee joked that it was a fact of New England that the weather was always going to be either hot, cold or rainy and that The Good Lord chose rainy for tonight.

“Either way, we wish you a Merry Christmas, a happy holiday and a prosperous New Year,” he said.

Marco Palmero of the Plainville Merchants Association pointed out how 10 local businesses were offering raffles that evening, and in some cases this weekend, for the annual Holiday Stroll.

Rep. Bill Petit told children that Christmas was about celebrating a special birthday and that it was also a time to be kind.

“Promise you’ll do at least one nice thing for your brother, sister, mother, father, grandmother, grandfather, aunt or uncle ok?” he said.

Superintendent of Schools Steve LePage wished everyone a merry Christmas and Happy New Year on behalf of the local Board of Education.

“I hope that the holidays bring prosperity for all and, for the kids, a lot of toys,” he said.

Brittany Gutierrez, a six-year-old from Wheeler Elementary School, was then invited to pull a switch to light the town Christmas tree and call for Santa. She was dressed for the occasion with a glittery red Santa dress.

LePage said that her teachers said that Brittany “brings joy to everyone who knows her with her infectious giggle and endless dimples.” He also praised her academic and creative achievements in school, stating that she is “ambitious and brave” and had a bright future.

Shortly after Brittany called “Hey Santa?” a fire truck pulled into the station with all of the lights going. Kids stood outside watching and the moment a red suit was spotted stepping out kids gasped “Santa!” in astonishment.

“Hello town of Plainville, Merry Christmas!” Santa said as he walked over to greet the children.

He then asked if Brittany would lead him inside.

“Yes, it’s cold out here!” another girl chimed in as she led him and the other kids back inside for visits.