8/31/2019 Mike Orazzi | Staff One of the completed quilts on display during a Remembrance Quilt Square Making event at Connecticut Clearinghouse on Farmington Avenue in Plainville on Saturday. Buy this photo

8/31/2019 Mike Orazzi | Staff A completed square in honor of Jessica Lee St. Germain made by her mother Holly McGloin and her sister June Sheehan during a Remembrance Quilt Square making event at Connecticut Clearinghouse on Farmington Avenue in Plainville on Saturday. Buy this photo 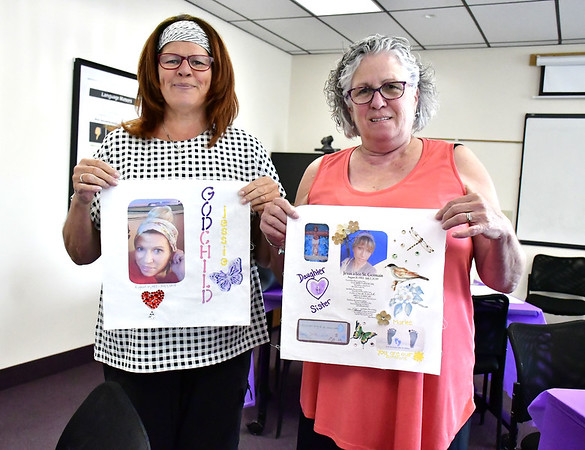 8/31/2019 Mike Orazzi | Staff Robin Cowles and Holly McGloin hold completed squares in honor of Jessica Lee St. Germain made during a Remembrance Quilt Square making event at Connecticut Clearinghouse on Farmington Avenue in Plainville on Saturday. Cowles is Jessica's god mother and McGloin is her mother. McGloin received help making the sqaure from her other daughter June Sheehan. Buy this photo

PLAINVILLE - Saturday was a somber day for people across the world.

As part of International Overdose Awareness Day, people everywhere were honoring loved ones lost to addiction and fighting to raise awareness of the deadly disease that has turned into an epidemic.

In recognition of the day, the Wheeler Connecticut Clearinghouse and the Connecticut Department of Mental Health and Addiction Services held a remembrance quilt square-making event.

It wasn’t the first time the clearinghouse held a remembrance event, and it likely won’t be the last.

“Even though the numbers declined slightly last year, we’re still looking at an epidemic,” said John Sponauer, the vice president of marketing for the Wheeler Clinic.

“The crisis affects every demographic, every town,” said Sponauer. “It’s in every neighborhood in the state.”

People have lost mothers, fathers, sisters, brothers, children and friends to addiction. In their time of grief, the quilt square-making event can give them some solace.

“People find it therapeutic,” said Sponauer. “We want to provide a space for them to express their remembrance of their loved one.”

June Sheehan was making a quilt square that day. She had a photo of a young woman to put on it.

“This is for my sister, Jess. She just passed in July,” said Sheehan. Saturday would have been her sister’s birthday.

“She would have been 36,” Sheehan said through tears.

People placed photos on the squares, drew pictures and wrote names or quotes. On a finished quilt hanging in the lobby, one square read “Not Forgotten.”

Sponauer said someone once brought in her daughter’s wedding dress to add onto her square, in honor of a life gone too soon.

“This is our hardest event,” said Kim Palumbo, a volunteer from Mott Corporation in Farmington. “This is an emotional event... This one touches people who have had tragedy in their lives.”

Mott not only sends volunteers to the clearinghouse, but also supports them philanthropically.

“Sometimes it’s so hard to truly understand the effect addiction can have on a family, so for me it’s very rewarding to be able to talk with family members and celebrate healing with them,” she said.

DMHAS created the quilt-making program in 2017. It works with organizations across the state to create the quilts, which are hung up at schools, clinics and events around the state when they are finished.

The Connecticut Clearinghouse was working on its fifth quilt Saturday. Each quilt has 36 squares. With each square honoring a loved one lost to addiction, the quilts alone can illustrate the staggering cost of the epidemic.

“People in addiction services haven’t seen anything like this,” said Sponauer.

Opioids, specifically synthetic opioids, are the main driver of the deaths, accounting for 67.8% of all drug overdose deaths in 2017, said the CDC.

“We’re still very much in the thick of this epidemic,” Sponauer said.

“Events like this help raise awareness of this disease - this treatable disease,” he added. “It erases some of the stigma.”

“This is one of the most important projects we work on,” she said. She added that every quilt-making event lasts a few hours.

“We want people to take their time and get it right,” she said. “This is where it comes down to the people.”

One of the clearinghouse’s quilts is designated to go to events and talks around the area. It just recently went to an overdose vigil in Fairfield. Wood said those interested in displaying the quilt at an event simply have to call the clearinghouse.

Wood added that people are welcome to make their quilt square at home and bring it in to be added to the quilt.

The Connecticut Clearinghouse has resources on addiction, as well as health and mental health. It also offers naloxone training. Naloxone, which also goes by the brand name Narcan, can treat overdoses.

Everyone should get naloxone, Wood said, regardless of whether you know someone fighting addiction.

Moreover, she added, giving it to someone who is not overdosing will not hurt them at all.

The clearinghouse also runs the addiction access line, at 1-800-563-4086. The line, funded by DMHAS, provides people with information on where they can get addiction services for themselves or a loved one.

The Wheeler Clinic offers group and individual counseling, medication-assisted treatment and peer support for addiction. The clinic gives out Narcan at the very first assessment.

In addition to quilt-making, DMHAS will also be flying a plane with a sign reading “Naloxone saves lives” along Connecticut beaches throughout the weekend. The sign is part of the Change the Script campaign, which aims to prevent and treat addiction.

Also on the sign is drugfreect.org, a website offering a wealth of information, from where people can pick up naloxone to prescription drop off sites to how to properly store medication.

Naloxone is offered at several pharmacies across the state.

A banner flying above the beach isn’t the only way DMHAS is getting the word out. It has also aired public service announcements at the DMV, gas stations and movie theaters.

“Anywhere we can get the message out,” Wood said.