Up, up and away: Fun takes flight at the 35th Annual Hot Air Balloon Festival in Plainville 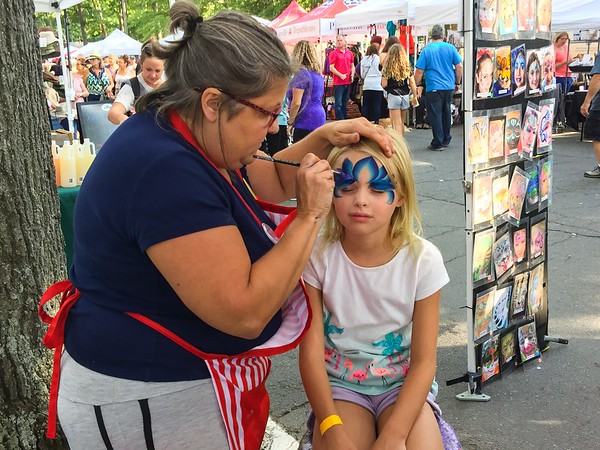 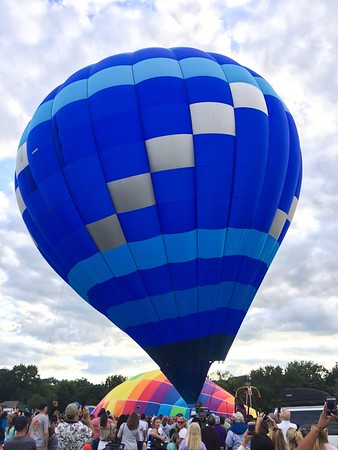 PLAINVILLE – There was more than excitement in the air Saturday in Norton Park during the 35th Annual Hot Air Balloon Festival.

Several enormous hot air balloons took to the skies and loomed over visitors. Each wore a vibrant color - bright green, red, blue or rainbow. Before long, the evening sky was dotted with the colorful orbs as they floated away.

Jim Lenois, chairman of the Plainville Hot Air Balloon Festival, said he expected around 30,000 people to visit over the course of the weekend. He said around 4,000 came to the balloon launch at 6 a.m. Saturday.

At the evening balloon launch, some of those 30,000 snapped photos and applauded as the balloons lifted off.

The festival is sponsored by the Plainville Fire Company.

“It’s really important to us because it’s our biggest fundraiser,” said Lenois. The proceeds made at their food booth goes to the company. They spend a portion of it, between $6,000 to $8,000, on scholarships. They also give back to sports teams, the Women’s Club and the Plainville Food Pantry.

“You name it, we help them with things when they ask,” Lenois said.

However, the festival is about more than raising money.

“It is also part of our town,” Lenois said, pointing out that the flags on streetlamps in town have balloons on them.

“We’re known for our balloons,” he added.

“It really put Plainville on the map,” he said, adding that he guessed probably only around 10% of the visitors are from Plainville, with the rest being from out of town.

“The firemen do an amazing job,” he added.

Capt. David Massey was helping out at the food booth.

“It’s going good,” he said. “The sales are pretty close to last year.”

He added that he was thankful for the “perfect weather this weekend.”

Thousands of visitors explored the 125 crafters and vendors, offering everything from clothes and jewelry, to coffee and maple syrup, to holiday decorations and chimes. Kids carried inflatable hot air balloons and the classic helium balloons.

Lenois said every year the festival is about 25% new vendors.

“We are adding more and more food booths,” he added.

Whether you’re in the mood for fried dough, pulled pork sandwiches, snow cones, popcorn or a waffle cones filled with mac and cheese, the Hot Air Balloon Festival had it.

“We’re having a really good time. It’s something really nice that the town does for the community,” said Joe King of Hamden. His favorite part was the food. He tried the cheese steak, tater tots and fried Oreos.

There was no shortage of activities for people to enjoy while waiting for the balloons to go up. For $5, people boarded a train to ride around the fest. Others got henna or face painting done. Some stepped into the fortune telling tent, while others leapt into the bounce houses.

“It’s been pretty busy. On a beautiful day like this, who wouldn’t want to be outside?” she added.

Many from far and wide stopped by the fest.

“It’s been nice. The music has been good. There’s a lot of vendors with good, hidden nuggets of stuff,” said Kevin Lewis who was there with his wife, Amber, and their two kids. They were visiting from South Carolina.

“We’re just excited for the balloons,” he added.

A total of 25 balloonists sent their balloons up into the great blue. Most were from the Connecticut Lighter Than Air Society and a couple were from New Hampshire and New York.

Joyce Fitz, a Plainville resident, has gone to the festival for several years. She has good reason to: she can see the balloons right from her house.

“It’s always something to look forward to every year,” she said. Fitz and her friend stopped by the festival after a bike ride. It was the icing on the cake of a perfect day.

“It was just that spectacular,” she said.