Erica Drzewiecki | Staff Ledge Road is closed at the intersection of Maria Road. Buy this photo 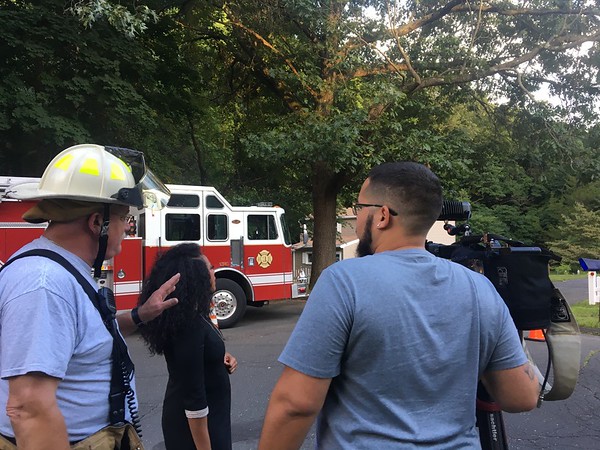 Erica Drzewiecki | Staff Planville Fire Chief Kevin Toner, left, talks to media gathered at the scene of a fatal accident Sunday evening, where a car was found on the side of a cliff face behind a home on Sunset Ave. Buy this photo

PLAINVILLE – An unidentified woman has died after a car went off a cliff on Ledge Road in Plainville early Sunday.

Emergency crews responded around 3:30 p.m. after a caller reported seeing a broken guardrail and discovered the vehicle more than 200 ft. down in a ditch on the side of the cliff.

Plainville Fire Chief Kevin Toner said the motor vehicle left the road at some point in the early morning hours. The sole female occupant was reported to have been ejected before the car landed on top of her.

“We responded hoping that we were going to extricate a live victim,” Toner said. “We got down there and found a female victim deceased. You always hope you’re going to save a life.”

Plainville and Southington Fire Departments set up their crews behind a home at the end of Sunset Ave. and Pickney Avenues in Plainville and repelled down the side of the cliff to extricate the victim and remove the vehicle.

Toner thanked Southington responders for helping at the scene and Farmington Fire Dept. for covering their headquarters.

“This is a team effort,” he said, adding, “My heart goes out to anyone in an accident like this. I don’t know who she is, but I know someone is going to be missing her tonight.”

Neighbors reported hearing a loud noise around 4:30 a.m. but did not investigate further.

“The bears are pretty active around here so we kind of just figured it was that,” said a woman who asked to be identified only as “Joanne.” She and her husband live on Pickney Ave., close to where crews removed the vehicle.