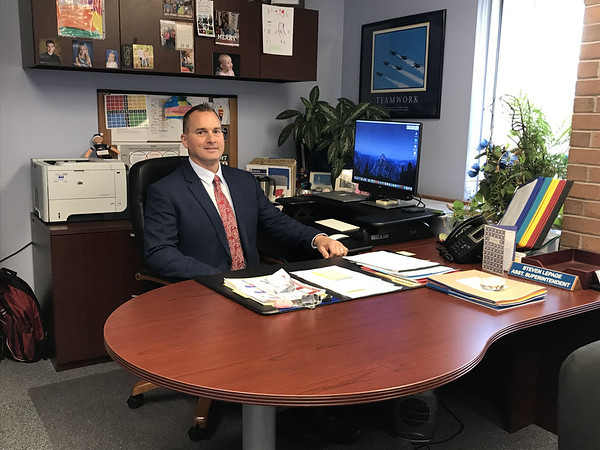 Brian Johnson | Staff Steven LePage at his desk. Buy this photo
Published on Wednesday, 15 May 2019 19:54
Written by BRIAN M. JOHNSON

PLAINVILLE - Assistant Superintendent Steven LePage has been selected to replace Maureen Brummett as the town’s new superintendent of schools effective July 1. He vows to continue “moving the district forward.”

LePage has served as assistant superintendent of schools since 2016, when Brummett became superintendent following her predecessor Jeff Kitching going on to become executive director of EdAdvance. LePage was also Principal of Plainville High School from 2010 to 2016.

“I’m really excited for this opportunity” said LePage. “I didn’t expect this a few months ago, but now it is setting in. I have received a lot of emails from families, former students and members of the Rotary Club congratulating me. I hope that parents and students will continue to get to know me like I already know many of them from my time at the high school.”

LePage said that his replacement for the assistant superintendent position will be announced closer to the fall semester. He decided to push off hiring for this position as part of a cost-savings measure with the Board of Education’s budget.

Brummett, who will become superintendent in Newington, said she felt the Board of Education made the right call in choosing LePage as her successor.

“Steve will do a great job and he will continue with the forward progress we have been making in the district,” she said. “I am excited for both him and the district.”

LePage said he worked closely with Brummett for many years on matters ranging from the budget to personnel issues. He said that he aims to continue the district’s commitment to a “professional learning community.” He supports educators watching recordings of their classrooms and conducting self-reviews as well as teachers giving each other feedback.

“We have been working with the Center for Emotional Intelligence at Yale to shape how we address both staff and students,” he said. “Maslow’s hierarchy of needs states that unless you address basic needs you won’t be able to progress. We are trying to be aware that there is quite a lot that comes to the classroom with students. If they come to school upset then they aren’t prepared to learn.”

LePage said he also hopes to improve family engagement with the school district.

“We have a core group of active parents, but we want to expand that group,” he said. “We want to consider new times, new methods and new opportunities to allow us to connect with more families. This is part of the district’s plan to help improve diversity. We have a diverse community, but we don’t always hear from a diverse group of parents.”

LePage said he hopes to create a combined Parent Advisory Council, featuring members of parent-teacher organizations in schools throughout the district. This group, he said, would likely meet twice a year.

LePage also plans to schedule an “open house” where parents can drop in at their convenience to meet with him for up to 10 minute conversations. The day of this event will be announced at a later time.